The popular video conferencing tool Zoom supports recording of meetings and automatic transcription of recorded meetings. I couldn’t find any information on the supported languages. Does Zoom speech recognition work with any other languages than English?

Probably not the way you want it to. The lens has an EF mount. Your camera accepts EF mount lenses. So the lens will mount to your camera just fine with no adapter needed. But it probably won’t work the way it should.

Older third party lenses, such as your Sigma 70-210 f/4.0-5.6, are reverse engineered to work with whatever camera bodies are already on the market when they are being designed. When the camera makers, in this case Canon, release newer bodies they sometimes use provisions in their lens-to-camera communication protocols that weren’t used in earlier models. The reverse engineered third party lenses can be less than 100% compatible with the newer bodies. Sometimes they’ll work under specific scenarios, but not under others.

For instance, I have a Sigma 70-300mm f/4-5.6 lens that I bought in the late 1990s for use with a Canon EOS film camera. The lens works fine with that camera, and any other Canon EOS bodies that old.

When I try to use the same lens on my Canon digital bodies, even older ones like the EOS 50D that came out in 2008 or the Rebel XTi/400D from 2006, it has problems. If any aperture other than the brightest setting (lowest f-number) is selected, when I try to take a photo it completely locks up the camera. I have to turn the camera off, remove and reinsert the battery, and then turn the camera back on to unlock it.

Newer third party lenses from Sigma and Tamron have provisions for owners to update the lens’ firmware themselves after downloading it. If an issue with one of those lenses crops up with a newer camera model, Sigma or Tamron will usually (but not always) release a firmware update that allows their lens to be fully compatible with the newer camera body.

For older lenses like yours, though, firmware updates required a trip to the lens maker’s service center. After a certain period of time they usually would no longer continue updating older lenses. It’s far too late in 2021 to get a Sigma lens from around 2000 updated to the latest firmware for that lens model that was probably written somewhere around 2005-2010 which would allow it to work with Canon cameras made by 2005-2010.

A few weeks ago I was trying to give a lecture on Zoom by sharing my iPad screen using Airplay. My Zoom session was through a Mac computer so the connection to the iPad was over the WiFi. The issue I had was things were very laggy. An audience member asked if I was connecting the two devices over WiFi and suggested that was the problem; I should use a cable to connect them.

I’m working on preparing for future lectures and I noticed that the presentation mode in Goodnotes does not work as intended if you go to Zoom, share screen, and “iPhone/iPad via cable.”

When I go to the Goodnotes website, they suggest the following:

I am playing around with my iPad and computer and it seems like, indeed, if the two are connected by a cable, the AirPlay connection will work even if the WiFi on my iPad is off. That just seems counterintuitive to me: you don’t choose the “iPad via cable” option, but instead choose Airplay even though they’re connected with a cable? I also haven’t seen anything online about Airplay working with a hard connection in the event the WiFi is off.

Am I understanding this right? I guess this is more than a solved problem by now. Was the audience member right that for Zoom lectures over Goodnotes, it’s best to use a hard connection (with Airplay)?

Will this Sigma lens compatible with my new SL3? If yes, any suggestions as to which adaptor I should get?

I have a question regarding SC 1.4.4 Resize Text for Placeholders for inputs. I am not for the design we currently have, but have to work a solution with whatever design I have.

The first row in the table has inputs to filter text in the table. In normal view without zoom, the complete placeholder text is visible. But when we zoom to 200%, the placeholder just shows “Filter” and the remaining text is cut off. My first question is whether this violates 1.4.4?

If so, the solution I recommended is to provide a title attribute for the input field, which is not ideal. It only satisfies people with low vision who can use a mouse to hover. But, users with motor disabilities using keyboard will still not be able to see, even though they can visually see the table and relate the column name with the input.

Is there a better way to address this issue without changing the designs? Attaching a screenshot for your reference. 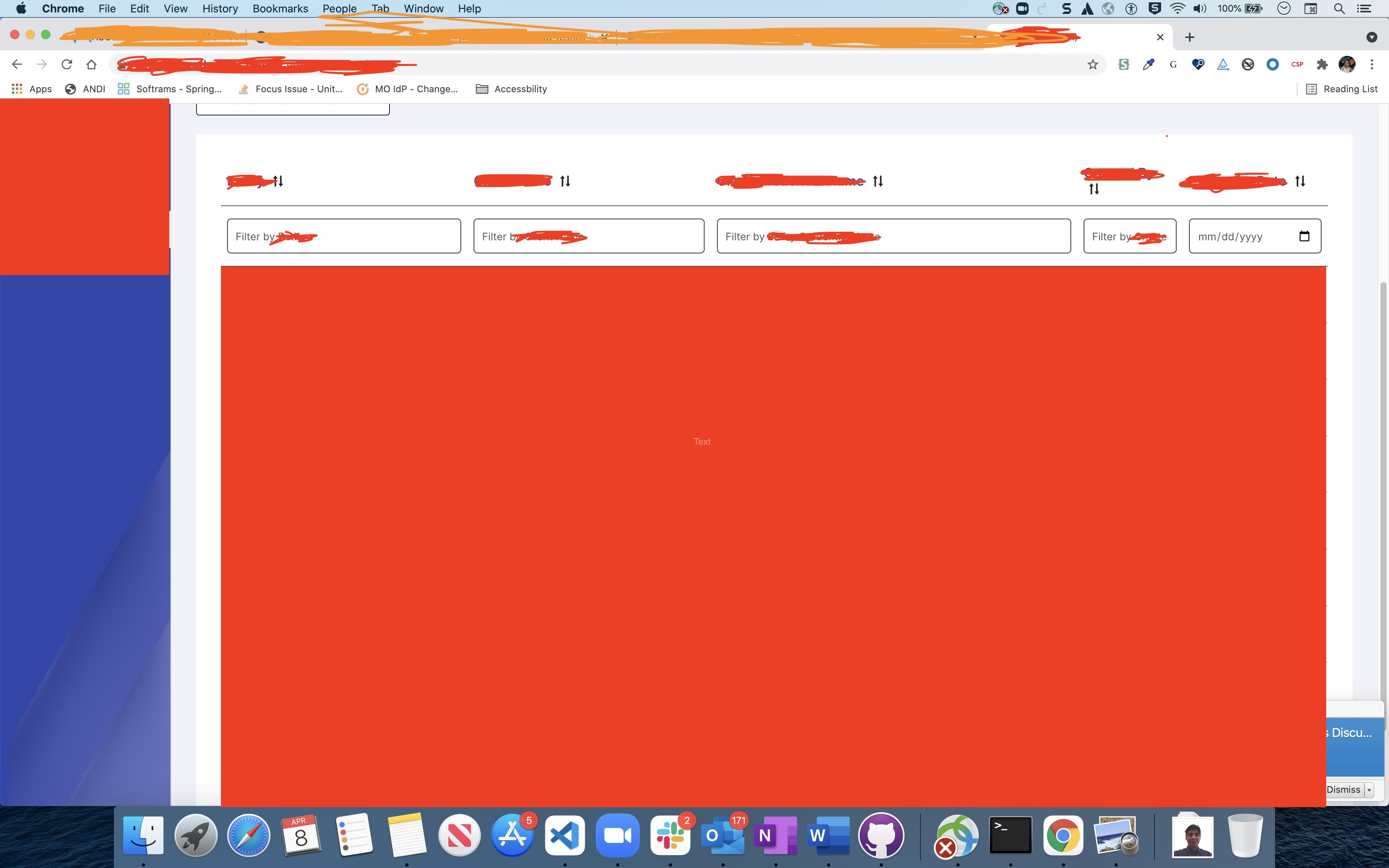 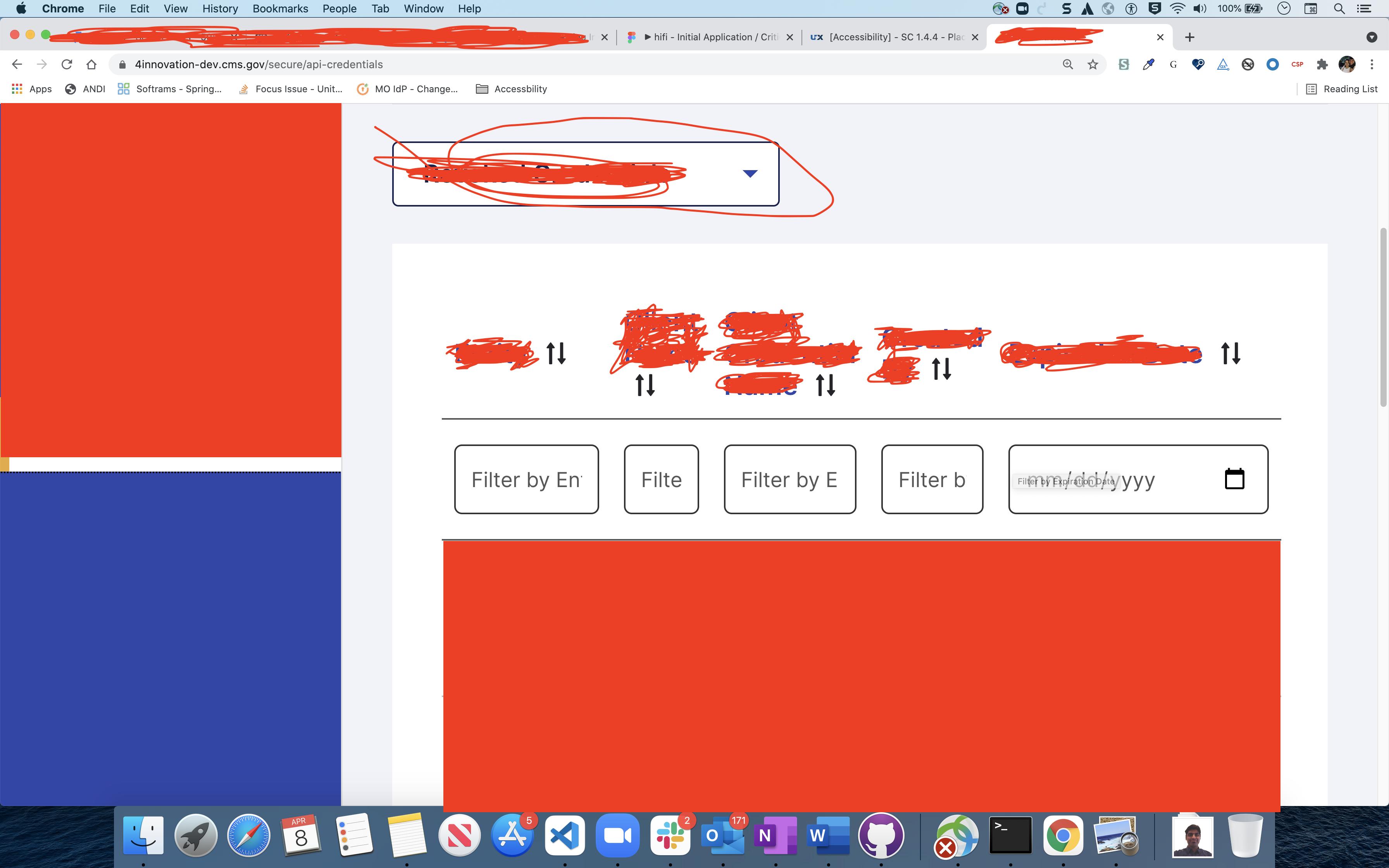 I’m testing a Minolta Riva Zoom 135EX. Everything works fine, but if I press the shutter without a film loaded it doesn’t wind on. Is this normal?

You can do so using the Android remote control software scrcpy:

Then in a Zoom call you can share your computer screen which shows the Android screen via scrcpy.