I have a set of several thousand strings of maximum length 1024 (containing all visible ASCII characters plus space) that I need to store to make it quicker to find an exact match for a key. What is the best algorithm for storing the set and looking for a match?

I want to extract certain parts of the email content and put the results in the list item fields.

I want to add this to a flow that I have already created that:

Is there a way to do this?

exist $ n times n $ points. How many strings exist at its vertices, where there are not three collinear points and each point is used at most once.
I have drawn examples below (red is fine but green is not). 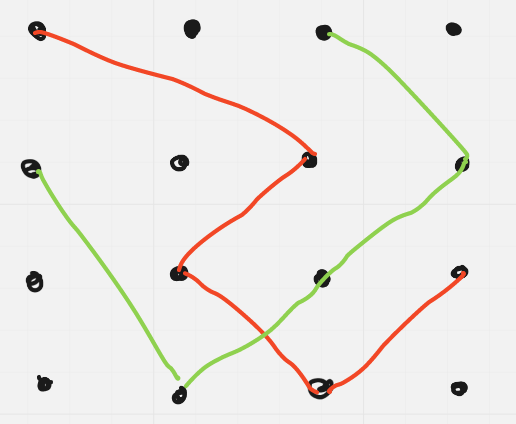 I have written the following function in C, which will take as input a character array (decayed to a char *, of course), and will mutate the string into an uppercase string in the title in the form "this is a string" -> "This is a chain."

Please provide any comments you consider appropriate. Is there a more concise way to do this? Is the notation in parentheses the clearest form?

In python, you can do this:

In Mathematica, it doesn't evaluate.

But why? These are literal strings, not symbols.

Instead of spelling out each element of the array,

just use a string literal. Is the same:

Instead of using assert in its functions just trust the user to pass a non-null pointer.

Should I print to stderr only in the (main) controller program and leave all of that out of the main "library" code?

Yes, exactly. You can return error codes and configure errno to be more specific.

Second, I have a enum definition for FAIL but I never actually use it because when I wrote the change clause I thought it might be a better idea to just default the error instead of explicitly selecting it.

It's okay. Anything other than a valid entry is an invalid entry.

Does not return a value of version_parse although it looks like he even inserted a new line where he was supposed to go.

Instead of using LEFT Y RIGHT, I would use GREATER Y LESS. Those names convey more meaning to me.

Functions that don't take values ​​usually have an unnamed name void parameter. I suggest doing that with main, because it could be undefined behavior if not:

(I also fixed the format to make it more consistent.)

All these (unsigned int) molds are not necessary:

In validate_version_string, tmp Y copy are unnecessary just use str Y *str, like:

You may think that delete tmp it's bad for performance, but it's not; at any non-zero optimization level, these are equivalent.

The main thing I would like to say is:

if you have strverscmp available (GNU libc and others), and your code doesn't have to be portable, why not use it?

Closed This question is out of scope and currently does not accept answers.

In a program I'm doing, a user-determined directory is needed to export a .bat.

The line that causes all commands to be exported to .bat is this

Go to Filter by condition Custom formula and insert the following:

where
A2: is the cell where your data starts and the row you are filtering (in example A1 it is the header and it is filtered by first row),
{"amazon", "amz", "azamon"} – list of its conditions.

A trivial algorithm would be this:

However, this has complexity $ O (n ^ 2 cdot m) $ – I'm curious to know if there is a faster algorithm (faster given the number of pairs $ (x, y) $ is much smaller than $ n $, for example, an algorithm with complexity depending on the number of output pairs).

Note that this question is a follow-up to this question, which deals with the same problem but for substrings (not subsequences). There, the Aho-Corasick algorithm solved my problem perfectly: is there something like this but for sub-sequences?