Moonbeam will only deal its damage once per round, unless forced movement (such as grapple/shove) push a creature into the affected area. The impact of a creature leaving the affected area is that the caster must then use their action if they want to keep that damage going.

By contrast, Flaming Sphere can deal its damage twice per round, if creatures fail to move away from it. A creature that keeps moving away ends up taking less damage, but the caster will typically end up using their bonus action to ram with the sphere either way.

Dust Devil won’t normally deal any damage, unless a creature is unable or unwilling to move away from the affected area. This makes it almost purely a control-based area denial effect, but couple with the forced-movement aspect it is arguably even better than Flaming Sphere in that regard.

If Flaming Sphere hit every creature within 5 feet at the start of their turn, it would be a considerably stronger spell, reliably hitting multiple creatures instead of just one.

If Moonbeam only triggered when cast and at the end of turn, creatures would move out of the area each time it moved, taking no damage. If it also dealt damage when moved by the caster, it would provide a much stronger incentive for the affected creatures to leave if possible, making it a stronger control effect.

Im trying to embed an google map onto a company website using the method.

This works fine, but the resulting maps show a competitor who is geographically close to the company whos website i am working on.

We dont want someone to visit the website i am working on and see a competitors name.

Eg. please see attached screenshot. (FYI this is a random screenshot i have taken from google maps, i am not related with any of these companies) If i was working on “Company A”‘s i wouldn’t want to host a google map showing “Company B”. 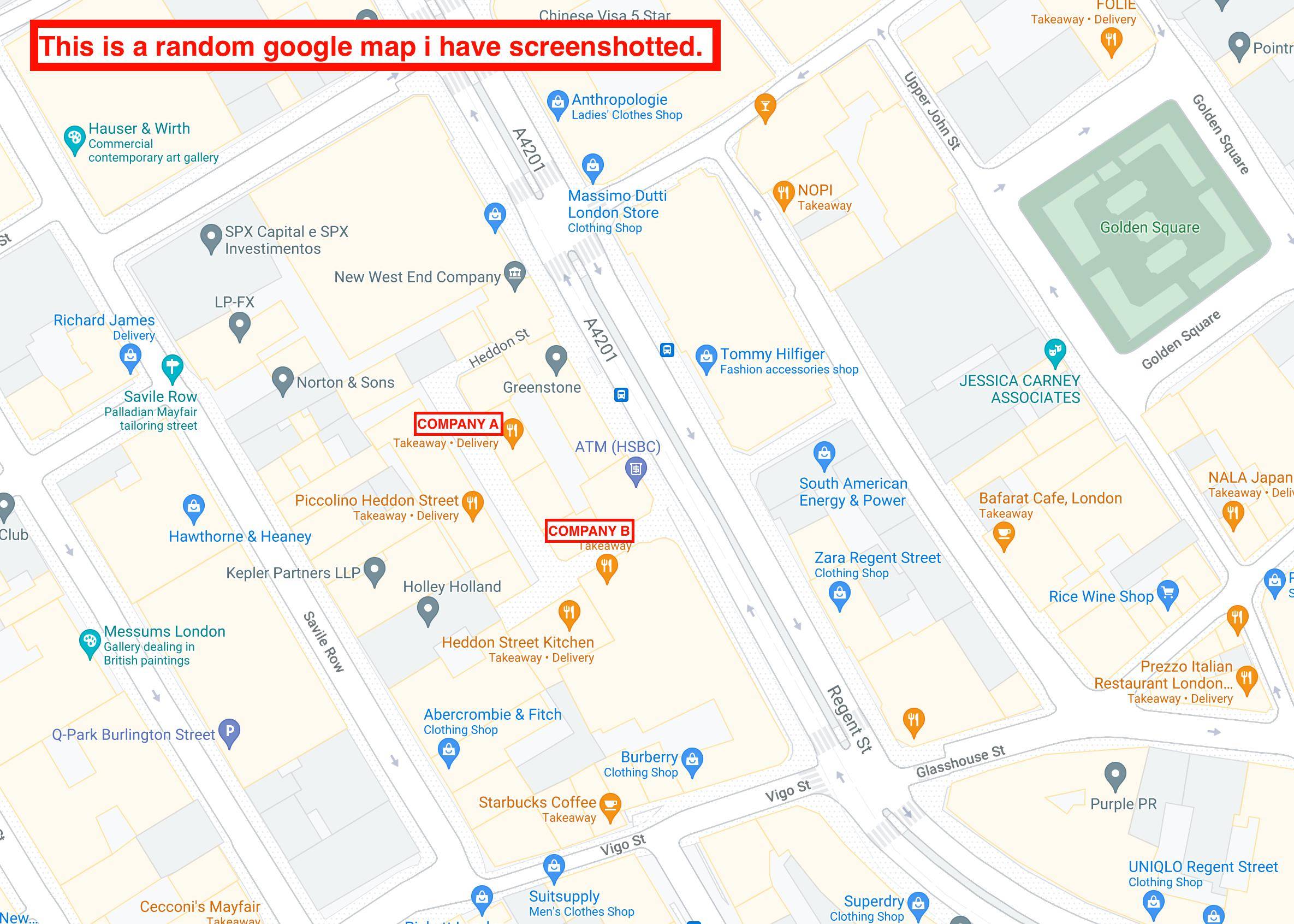 Accordingly is it possible to make a custom google map removing select certain pins that i dont want ?

On a smooth manifold of dimension $n$, the application value of the canonical $1$-form, the Liouville form on $T^*(X)$, to the Hamiltonian mechanics is well known; $T^*(X)$ is a degree $1$-Jet bundle. My question is Do canonical forms similar to the Liouville form exist on higher degree Jet bundles?
I ask this because, beyond the invariant sub-principal symbol of a pseudodifferential operator, nothing much seems to be known to handle multiple characteristic problems, especially of the non-involutive
type. I am aware of Ivrii-type Fuchsian operators, already posing great difficulties.

I want it to grow. Is reshaping the way money moves worldwide, I believe is a good addition to our lives and business-wise considering the fact that governments want to manipulate our lives. Not anymore when you hold Bitcoin.

Column A of my spreadsheet has the following data with only values of A, B, C, D and E (shown below). There are more columns that I like to sort with, and would like the first column to highlight the FIRST 5 (not Top 5) of each different class. So when i sort column B, column A (shown below) would highlight the first 5 “A”s, first 5 “B”s, etc.

When I sort from column C, column A will change, and conditional formatting will highlight a new set of first 5 “A”s, “B”s, etc.

Is there a way to unify or refactor two methods that do basically the same but the difference being of handling a type of object or a collection of the same type of object?

The following is an implementation of two methods that have very similar behavior. They handle a cache for an API, so when someone asks for a value or a set of values, it verifies that the entry is in cache already. If not, they call the method that will return from an external API: a value or a set of values. Finally the methods, update the cache and return the value/values.

Essentially I have a bunch of data in a Google sheet from a Google form asking people what video games they play. I have results like “CSGO” and “CS:GO” as well as “Kovaak 2.0” and “KovaaK”. I’d like to be able to find similarities like (within a certain %) these and turn one into the other so they are uniform.

Python does not interpret line by line. The default Python implementation (CPython) compiles the entire module to bytecode and then runs it. However, the CPython implementation does not place an emphasis on optimizations. The interpreter will do exactly what you tell it to do, which means that small changes to your code can have a big performance effect. In particular, function or method calls are relatively “slow” in CPython.

But in absolute terms, it doesn’t matter for performance. You’re writing code for GUI automation. The interaction with the GUI will be far slower than calling a function or parsing some lines of code. This is a bit like being on a journey between two cities. You are proposing to take a shortcut that will save you a minute on this tour, when you’ll actually spend an hour waiting in an airport to board a flight.

So performance doesn’t really matter here. What does matter? Maintainability. Instead of copy and pasting the same code four times, it is usually better to clearly separate the things that stay the same from the things that differ between instances of this code. A function is the perfect tool to express that. Thus, while your alternative solution with a function might run 200 nanoseconds slower, it is the objectively better approach here.

In reality, writing maintainable code with good abstractions is good for performance. When your code is easy to understand, it is easier to understand how performance can be improved, and to implement those improvements. For example, if you find that there’s a faster alternative for the checkExists() method, you’ll now only have to update it in one place. Of course, most code is not performance-critical, so such optimizations are unlikely to have a noticeable effect.

In Power Bi I have a similar Table and I’m trying to figure out a way to calculate in column “G” the maximum value (only for Gender F) for each Team and each Day.

Anyway, I’ve written the Excel formula only to explain better the desiderd outcome, I do know that DAX’s logic is different, but I can’t find a way to make this work in Power Bi. I’ve managed to obtain the maximum value, but it’s written on each row of the column, which is not what I want.

Any help is appreciated, thanks!


Want to improve this question? Update the question so it’s on-topic for Information Security Stack Exchange.

We are looking to incorporate a product that helps us manage our Container Security, IaC scanning, and Code scanning with CI/CD integration. Snyk is looking really good and it covers all of our needs in one place, but we want to do our dilligence and see if there’s anything else out there. I have not found anything yet that seems as good. We are not too concerned with open source vulnerabilities at the moment. Feel free to suggest products that only solve one problem, we don’t have to consolidate each solution into one product.

A bit about our stack:
Terraform, AWS ECR for our containers, Gitlab and Github, Drone CI on Github, Gitlab CI on Gitlab. For Code scanning we are looking for Java, JavaScript and PHP.