When my Windows 10 is connected to PPTP VPN connection, I can still use the local IP address of the device that DHCP gave it, to connect to my Windows 10 from Android RD client app.
this shouldn’t happen as I haven’t “unchecked” the box that this answer is referring to. 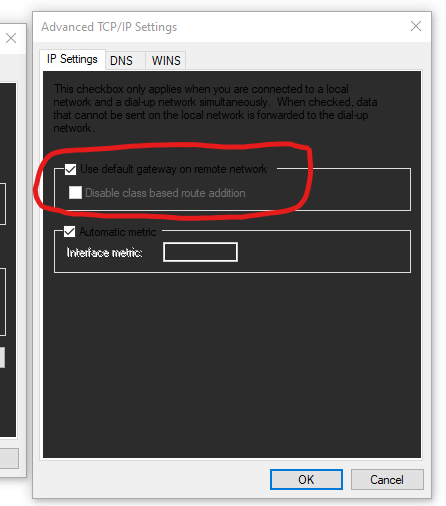 so why is that? is this because of a configuration on the server side? or the IP table or DNS cache on Windows 10 still knows/remembers how to route local traffic? I really want to know the reason.

My office recently ditched Citrix for Microsoft RDP. One thing I miss is that previously I could switch to another app (i.e. Stickies, where I do my typing) and if I hover my mouse over an object on the remote connection, it would still show up as if it were in the foreground.

To be super specific: I am a physician and I freetype in Stickies because it’s better than our Electronic Medical Record (NextGen). If I want to see what meds my patient is taking, I’d hover my mouse over the Medications button, and a Tool-tip would appear.

Currently with RDP, it doesn’t seem to track my cursor once it’s no longer in the foreground (i.e. the tooltips never show up). It doesn’t work on Windows (10?) or macOS.

Is there a way to fix this?

I was wondering, for a gradle android project.. in case of a generally unstable library, is it possible to control it’s version via a remote flag (preferably firebase remoteconfig)?

For example, currently in production I am using library:1.2.4 and I would like to update to library:2.0.0. However, I know that the library is not usually well tested. In that case I would like to have a remote flag IS_LIBRARY_VERSION_2_0_0 and have the ability to roll back the version without the need to push a new apk to the users. Would that be possible?

I was recently offered a remote developer position. The offer itself is good but there’s one factor which bothers me. They require all the developers to work on remote desktops. And I have a number of concerns regarding that:

P.S. It’s not a bank, military service or anything like that. It’s just a regular e-comm. They say, they have this policy for security reasons.

I am trying to set default browser on multiple remote computers that are not on the domain. There are more than 200 computers, so it would be very time consuming to do it manually. The remote computers have Windows 7 operating system with outdated updates.

I am trying to set default browser on multiple remote computers that are not on the domain. There are more than 200 computers, so it would be very time consuming to do it manually. The remote computers have Windows 7 operating system with outdated updates.

First of all, I’m not well versed in SQL anything at all. Closest I’ve ever needed to get was storing and retrieving data from a local SQLite db.

In essence I think I have a simple problem but it’s hard to orient yourself when everything is new.

My main tool at work is an ERP software, which is basically a front end to an SQL db.

Problem I have with it is that it’s very clumsy and doesn’t allow automation of even the most basic tasks.

What I want to do, is bypass the front-end completely and interact directly with the db to automate most of my tasks with python.

I can connect to the database just fine from python environment, but the schema is gigantic, there’s no way I’ll be able to find whatever it is I might be looking for.

So I need to capture the call front-end sends when I click a button (telling it to display specific set of data) to use that call as a guide.

Basically, how can I, an SQL noob, capture calls that a desktop application sends to a remote server?

Edit 1: My job is mostly analytical, so all of my automation will be for retrieval, analysis and visualization. I’m not very likely to mess anything up.

Edit 2: Tried running a Profiler and got the message:

“In order to run a trace against SQL Server you must be a member of sysadmin fixed server role or have the ALTER TRACE permission.”

I’m not a sysadmin, don’t have an alter trace permission and reeeally don’t feel like asking for it 😀

I need tech support from a plugin vendor and they need remote access. I am running the latest versions of WordPress with Elementor on a Windows 10 machine and host using localhost. Specifically I am using Laragon.

A Laragon URL to load the site locally typically looks like this: sitename.local:8080. Laragon provides native support for remote access by means of ngrok called by a menu selection used to “share.”

So I installed the free version of ngrok. I used Laragon to share and Laragon calls ngrok that gives me a URL to use for 8 hours. I test the ngrok URL from another remote machine and it loads and I login to the website. Then ngrok bombs out because WordPress/Elementor are generated too many HTTP requests.

My question is “Do we have a plugin or any other means to determine how many connections our localhost website is generating before paying for ngrok?” They do offer 15 day payment return but I’d actually like to know how many connections are being made as it may help provide insights regarding performance.

Finally, the big question: “What is my optimal choice for providing remote access to my websites running on localhost?”

I have a MySQL 8 server on a virtual machine. I’d like to start it up when another server wants to communicate with it, and shut it down some time after there hasn’t been any connections or queries.

Right now I’m polling the VM to get it somewhat working, but there’s gotta be a better way.

I read the MySQL docs on handling Unix signals, but there isn’t a “startup” type signal.

I also read about MySQL events, but those seem to be limited to operations within the database like SQL queries.

Does MySQL have a way to push events to a remote server on startup, shutdown, error, etc.?

It’s probably possible to achieve in a script on the OS, and then send a curl request to the remote server with appropriate info, but MySQL’s a big software and I’m curious if this functionality is hidden somewhere in it.

When a client is physically on the network their IP address is 10.1.0.10. When they remote into the VPN server they are on the 10.250.0.0 VPN network, so their IP address may be something like 10.250.0.20. Is it possible to configure a route such that a client is always accessible on 10.1.0.10 regardless if they are physically on the network or remotely connected to the VPN?