I am working on a simulator that simulates patients, so specific processes can be validated in "virtual" patients, before testing real patients. The simulator is essentially a mathematical model that consists of multiple ordinary differential equations (ODE), which can be calculated using a numerical method. These mathematical models are calculated step by step, which means that you need the previously calculated values ​​to calculate new values. These steps can be small or larger, the smaller the step, the better the result, but it will take longer to calculate.

At first the development went well, but gradually the simulator became a disaster, we introduced a second mathematical model and a second EDO solver. I had to work with the same "virtual" patients. But the second mathematical model required the patient to have some additional fields and the vector matrix of calculated values ​​became slightly larger (from 7 entries per step to 10 entries). This worked, but now we are thinking of adding another mathematical model, which requires even more properties in a patient and the calculated values ​​could not be stored in the same vector matrix, because the first 3 entries are for different values ​​from the Other models. We are now contemplating leaving the first 3 0 / null entries and adding 3 entries at the end of the vector matrix for the newest model.

Here is our silly class diagram to show the problem: 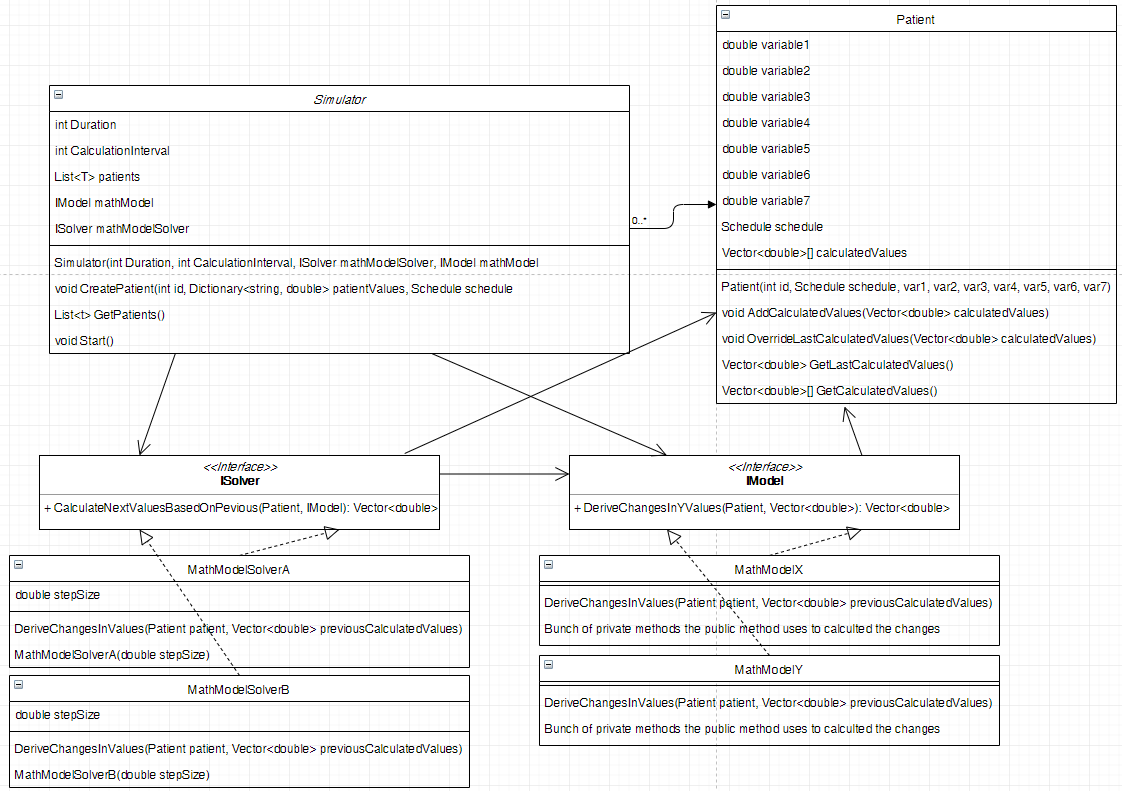 The class diagram shows only 2 concrete models and 2 concrete solvers, but we need to add at least 1 more model. As you can see, the patient has 7 variables. The first model requires the first 5, the second required them all and the newest model requires only the last 4 (and 2 additional not yet added). Below is a schedule with "life events" of the patient that influence the calculated values ​​of the patient. Below that is the vector matrix that has 10 entries. the first 7 are only used by the mathematical model X, the 10 are used by the Y model and the newer model would require adding an additional 3 at the end, and the first 3 would not be used by that model.

What is a design pattern that works here?

Heritage
I tried using inheritance. The second model uses the first model as a base class, this works. But when a third model is added that does not need some values ​​/ functions, is that still the right way? In addition, the patient's problem still existed, because it would also need to be inherited or additional attributes would simply be added.

decorator pattern
I also tried this, but I had the same problems as with inheritance.

Does anyone see a solution for this design problem?

Then there is a second problem
This problem is related to the creation of the simulator mentioned above. As you can see, patient creation is done through a CreatePatient () function in the simulator, which requires a list of patient values ​​(varibale 1 to 7 in patients) that is growing since more model was added. And a schedule with "life events" that influence the values ​​calculated by the patient.

The creation of the simulator, the schedule, the model and the solver is now done in a CLI and GUI project that refers to the Simulator project. There are 2 problems I see, the first one refers to the growing list of attributes / properties and the vector matrix of calculated values ​​when adding a model. This makes it more difficult to create a patient. To solve this, the first problem addressed above that must be resolved first is my opinion. Second, creation is a bit weird now. The CLI requests a user file path that points to an .ini file with configuration for the simulator. This .ini file consists of a configuration such as the duration of the simulator, how large the step size should be (remember the models mentioned above and how they are resolved), if the patients should be exported, seeds. It also provides for each possible patient value (patient attribute / property) the range that this value can be, and you can also add a file path list to .ini files that contain coded patient values.
Therefore, one could say that I want 50 patients, then 25 .ini files are indicated in the .ini configuration file for the simulator and the rest of the patients will be generated using the specified value range. The same is done for the schedule that must be generated for each patient.

The problem I see with the above is that a patient is created through the simulator object after creation, but the patient's schedule is not. The reason why programming is not is because it is now generated in the CLI / GUI according to some configurations in the .ini file. Should these creations be done differently? Should the creation of a patient even be done through a simulator object? Should there be a factory method for each object (schedule, patient)?

As an action, you can spend a use of a healer's kit to serve a creature and restore 1d6 + 4 hit points, plus additional hit points equal to the creature's maximum number of hit dice. The creature cannot recover hit points from this feat again until a short or long break ends.

Nowhere does it mention that the objective must be motionless or that this should be done out of combat. D&D is not a realism simulator and it doesn't really matter that, realistically, you cannot bandage a person while dodging and weaving in a combat scenario. Realistically, you could also bandage someone more than once if he has multiple injuries.

For the balance of the game, it has been decided that you can use the action at any time, but only once per short / long break. Houseruling that can only do it out of combat while they are still is a perfectly valid houserule, but it will ensure that no one in their right mind will take the feat, since it makes it a rather good healing feat in a waste of their feat slot.

The point of the healer's feat you refer to is:

As an action, you can spend a use of a healer's kit to serve a creature and restore 1d6 + 4 hit points, plus additional hit points equal to the creature's maximum number of hit dice. The creature cannot recover hit points from this feat again until a short or long break ends.

At that specific point there are no limitations on the creature that receives healing (and, interestingly, there is no mention about the extent of this ability). When passing through RAW, the creature that receives the healing could be technically in the middle of the combat and still be healed, although I don't think that's how the rules were interpreted, since the healer's kits were destined to stabilize and not to heal .

Are you patient with your forum staff? How many times do you allow them to make mistakes before it's time to fire them?

Why are you selling this site?
I have several websites / blogs to manage and I have to let it go. It's a great domain name and diabetes is an evergreen niche.

How is it monetized?
promotes a clickbank product
You can also add adsense ads.

How long does this site take to work?
hosting account

What challenges are there with the execution of this site?
The new buyer must write at least 1 article a week to get traffic and sales.

I will transfer the blog to your hosting account for free and edit Clickbank affiliate links.

The best cancer hospitals in India