I am using Mac OS X 10.15.4, and intermittently my mouse right click starts behaving like a mouse left click; i.e. no matter how I configure my mouse, I cannot get the right click (secondary button) behaviour. It is an Apple USB non-cordless mouse; the Mac came with a cordless mouse but that died.

It usually comes good after unplugging and replugging the mouse from the USB port, a few times.

It is possibly a hardware issue, but if it is, why does right-clicking do anything at all?

Probably the only “uncommon” way I use my Mac is I leave the emacs editor constantly running; emacs is a huge program and I guess there is a chance it is doing something strange.

Is this a known issue? Or does it sound like a hardware issue?

I have DFS setup on my network as follows:

On the file servers, I have a share called “public”, which is successfully accessible from the Windows 10 workstation as \FS01public and \FS02public.

On the AD controllers, I have a DFS namespace set up called “dfs”, with a share called “public”. This share has the following targets:

I’ve tried accessing the share from the Windows 10 workstation in the following ways:

I’ve tried changing the targets from the FQDN of FS01.DOMAIN.LAN to just FS01, or even just the IP address of the file server, and this makes no difference. However, since I can access the share through the DFS name space if I hit the AD controller directly rather than the domain name, this would seem to rule out both DFS configuration problems as well as DNS problems (even though the fact that it’s intermittent would also seem to point toward DNS), which is why I’m unsure on how to proceed with troubleshooting.

A couple of things to note that may or may not be relevant:

I do recognize that the VPN could be an issue. However, a workstation that is also local to the servers exhibits the same symptoms, so I don’t see the VPN as a differentiator. The VPN connection to the server is solid as are both internet connections, and ping times across the VPN are 20ms or less.

I’m looking for either someone that has experienced this issue and has the solution, or at least a process I can use to further troubleshoot.

I have taken a lot of photos, over the past couple of days, using my Mobile phone. I have since uploaded these Photos to my Computer, via Google Photos.

I have noticed that a small minority of these Photographs have had random letters inserted into their ‘Title’ and ‘Subject’ attributes. These are viewable when I right click on the Photographs and head to Properties > Details: 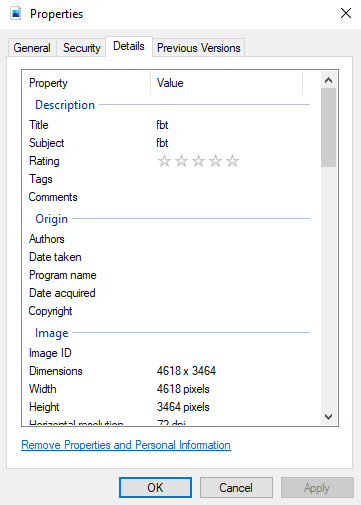 I have tried to look for a pattern on when these values are inserted but have come up with nothing. For example:

It appears to be random. Has anyone else experienced this and/or have any idea what is causing this to occur?

I figured this one out in the end, but thought I’d post it with an answer in case it helps anyone else.

I noticed that sometimes the receiver didn’t appear to fire. I debugged it using Visual Studio to check. One of the columns in the list was a multi-text column, and I noticed that for the items where the event didn’t trigger, there was more data than usual in the multi-text column. I copied the text from the muti-text box into notepad, and set up a test. I added an item manually and pasted all the text. It didn’t fire (either for synchronous or asynchronous events). I then only copied about half the text and tried again. This time it fired. I went back and forth a bit until there was a one-character difference between firing and not firing. I then tried updating the title by one character, leaving the multi-text, and this also affected the behaviour – so this was an issue to do with the total size of the list item, not solely the size of the multi-text column.

I couldn’t find anything about list items with large amounts of data having issues with Remote Event Receivers, but it was quite hard to research the issue as there are so many questions out there about RERs generally.

I have the weirdest problem. Flash fires fine without anything attached to the head, or with my Gary Fong lightsphere or another cheapie mini softbox strapped on. But when I use the black Gary Fong speed snoot, it suddenly stops working! Strange. I don’t know of any sensors that it would cover. So bizarre.

Tested extensively. Occassionally it will work with it on, but that’s the exception.

When it doesn’t fire, the flash unit still makes that whirly recharge sound and a beep to say it’s ready again. So clearly getting some kind of signal.

Even though the manual says to put the hotshoe unit on TX, it also works on TRX. So I’ve tested extensively on both settings. Changed radio frequencies, changed batteries, all the usual troubleshooting stuff. Literally no settings changed from when it fired without the modifier on to when I put it on and it stops firing. Then i pop it off, boom, flash fires again.
Also works fine if I put the flash and speed snoot on the camera hotshoe. But I would never use this thing on camera, so that’s a bit useless for me.

So nothing to do with camera settings is what I mean with all that too.

If someone has any ideas how to get around this I would greatly appreciate it!

Camera is Fujifilm X-T2 if that makes a difference.

My drupal website is running on acquia cloud behind cloudflare. And there are there levels of cache avaialble.

All these caches are set to expire after 5 mins. Now some Drupal basic pages intermittently end up in 404 (though it happens once a month, but it is continuously happening) and they don’t show up again until we clear cloud-flare and varnish cache and sometime Drupal cache even though the cache expire time is set to 5 mins.

I have tried to stitch down various logs available for one single request that started the 404 status code for one of the page.

Now I am looking for answers to these questions:

Thanks and looking forward.

jq install is failing intermittently with this error.

Is anyone else facing the same issue?
Thanks!

Here is the code snippet:

It happens after the last statement.
Please help.

When the table is updated per hour, the update trigger saves the previous quantity in a table package variable in this format: primary key fields, quantity.

The amount is set to -old_amount. Then add the new quantity to the quantity. It does this for each time record that is updated. Then, if there are 120 hours in a month, you will subtract the previous amount 120 times from the variable and add the new amount 120 times to get the total change. A subsequent declaration trigger or a manual call would update the month record with this total and erase the package variable. When we are updating a large number of hours, we set an indicator to disable the month update and then manually call the update method once at the end to get performance. However, the problem has already happened when this method is called.

When I update an agreement that runs for several years, the total amount is canceled for a new amount, the previous amount in a random number of months. So, if the previous amount was 100 per hour and the new one is 10 per hour, then the amount we take to the month's record is -90 what it should be. Most months would be correct. I have seen zero, one, two and four months interrupted after each update / rollback test run. Every time I run exactly the same update and then go back after checking the error.

I recorded every time the package variable changes to a new table and I saw the following:

Observe what happens between rows 2 and 3. The final quantity in 2 is the correct value of 540. The initial quantity in 3 is 550, displaced by the new volume (20) – previous volume (10). This ratio was maintained for an update of 100 to 10, the amount shifted was -90, not 10. And yet, there is no gap in the index of the row. We go directly from 16188 to 16189 without a gap. I created a copy of the package and deleted everything except the method to update the package variable. There is no other route to update the table variable, except through the method that is registered. The package variable is defined within the package body, so no other package can update it, and I removed all other methods in the package, except the one used to update it. I cannot understand how this variable is changing between the end of one method and the beginning of the next.

Again, the number of months affected by this problem is random, and all are divided by the same amount, one month is not compensating another with an error.

Note that I have endeavored to reduce the following code to a minimum version of the code. The names of the tables and columns have been changed. If I try to execute the activation code in a loop instead of executing an update, the problem does not occur.

SUB_KEY is not used in the package variable, since it only defines the hours in this table, so all hours with the same KEY and SUB_KEy will be in the same month, regardless of SUB_SUB_KEY.

Package trimmed, there is only one portion left that plays HOUR_TAB:

Code to verify records for errors:

I have checked to see if there are more rows than there should be with the same index or sub_key, but the number of rows of sub_keys and index_rows is always the same. At this moment my only hypothesis is an error in Oracle. I am pleased to provide more data or code if necessary, but since I have not been able to duplicate this in another table, I am not sure how to help another person reproduce it.

Thank you for your help and patience to read this text wall.