I’m the secondary storyteller for a Werewolf: The Apocalypse game.

Our group is made out of mostly urban figures – specially Glass Walkers and Bone Gnawlers – playing out a very finance-oriented pack that is trying to do their part in saving Gaia by playing the Corporate Game/Stock Market and using their money and influence to change the world.

Yes, I have a weird group. Anyway!

A new player is scheduled to join the ranks of our pack. They want to play as a Metis, but of a non-standard type: a Ratkin/Garou hybrid Metis.

While mechanically this is easy to achieve – just put them to play by Garou rules and add a few appropriate Merits/Flaws – I have no idea if this is actually something that can be achieved lore-wise.

Is it possible to have a Metis born of parents of different Changing Breeds? If so, what happens? Is the Metis an hybrid, or does it take the after only one parent?

Perusing the Monster Manual, it might seem that only Werebears change their size when they shapechange. I will list the entries here:

Werebear: The werebear can use its action to polymorph into a Large bear-humanoid hybrid or into a Large bear, or back into its true form, which is humanoid. Its statistics, other than its size and AC, are the same in each form.

Wereboar: The wereboar can use its action to polymorph into a boar-humanoid hybrid or into a boar, or back into its true form, which is humanoid. Its statistics, other than its AC, are the same in each form.

Wererat: The wererat can use its action to polymorph into a rat-humanoid hybrid or into a giant rat, or back into its true form, which is humanoid. Its statistics, other than its size, are the same in each form.

Weretiger: The weretiger can use its action to polymorph into a tiger-humanoid hybrid form or into a tiger, or back into its true form, which is humanoid. Its statistics, other than its size, are the same in each form.

Werewolf: The werewolf can use its action to polymorph into a wolf-humanoid hybrid or into a wolf, or back into its true form, which is humanoid. Its statistics, other than its AC, are the same in each form.

It might seem that only the Werebear even gets a size increase, and that sounds about right since Bears are huge, much larger than Boars, Rats, Tigers, or Wolves.

However, looking at the statistics blocks for a Tiger, it is a Large Beast. And in the Weretiger’s shapechange text, as with the Werebear and Wererat, says this:

Its statistics, other than its size [and AC for the Werebear], are the same in each form.

Hybrid applications combine features of both native and web apps. They can be accessed via a web browser and downloaded from app stores. They are written in HTML5 and JavaScript, like web apps. For the most part, they are web pages wrapped in a mobile app using WebView.

Native applications are smartphone apps specifically designed for a particular operating system—iOS or Android. What distinguishes native apps from mobile web and hybrid apps is that they are developed for specific devices. For instance, Android apps are written in Java and iPhone apps are written in Objective-C or Swift.

I tried to install Linux on SSD and HHD, but I think I accidentally got rid of everything. I have been trying to use an 8 GB usb to reinstall windows but it hasn’t been working. With Ventoy I am able to get the Install or repair windows page, but when I go to install it says it is missing a file. With UNetBootin, I get stuck in an infinite loop with automatic boot. Is my only option to try to do Windows Creation tool on another computer? I am not sure what’s going on.

I am on my phone right now, but I can try to get photos later on.

You cannot change your statistics when shapechanging

And the Changeling’s Shapechanger trait states:

We know “What all is included in a creature’s game statistics?” which is basically everything about an NPC, monster, PC, or anything else really. And these features cannot change your statistics. So while you might be able to look like a hybrid form that you have seen, you would not gain any benefits that that creature usually has.

You cannot change your statistics when shapechanging

And the Changeling’s Shapechanger feature states:

We know “What all is included in a creature’s game statistics?” which is basically everything about an NPC, monster, PC, or anything else really. And these features cannot change your statistics. So while you might be able to look like a hybrid form that you have seen, you would not gain any benefits that that creature usually has.

We have a hybrid setup.

I have a situation where certain users are not showing up on the local on-prem Exchange 2013 server under recipients.

We have two domains in our single forest. I will call our primary domain abc.com and the second domain xyz.local.

I tried to modify some of the attributes in AD on some of the users in xyz.local and then they started showing up in recipients -> mailboxes in the Exchange admin center for the on-prem Exchange server.

These are the attributes I modified, matching them with attributes from a user in abc.com:

I am not sure if it is just one of the above attribute changes that allows the user to start showing in the on-premise Exchange server recipient mailboxes, or a combo of attributes.

However, once the user from xyz.local shows up, I get an error if I try to view or modify any properties via the Exchange admin center (on-prem):

I am wondering if you might have any advice. It seems like maybe the on-premise Exchange server just needs to be made aware of xyz.local. I did a lot of searching and have not been able to figure out if there is a setting in EAC or a PowerShell command that I should run in the Exchange Management Shell. Any help would be much appreciated.

I’m looking for a license to put in a publicly available GitHub/GitLab/etc. repository. This license would be almost Open Source, but it would give me the exclusive reserved rights to distribute functional versions of the software, for lack of a better term. Basically anyone would be free to do with the code as they please, so long as they’re not taking users from my published program (people cloning a modified version of the source code to run it does not count as taking users from the original for the purposes of this license). Hence, Hybrid Source.

What the License Will Allow

Anyone can copy, redistribute, execute, modify, and otherwise utilize the source code however they see fit for personal and/or private use. Some examples:

In other words, I want anyone to be able to fork, modify, and submit a pull request with my source code.

What the License Will Not Allow

Only I can release functional versions of the software to the public domain. Some examples:

Basically, if someone clones and modifies my repo, but then instead of submitting a PR they just chuck it into another publicly available repository, I have the right to merge it into mine and utilize it in my commercialized application. I would be the one responsible to take that action if I wanted the code in the original, but they would still be free to keep their repository up if they so desired.

What I’m Trying to Accomplish

I want to develop an application that can receive contributions from the community, similar to OSS. However, this application will have a subscription model that could potentially entice someone to tank the cost of running a cheap VPS in order to release a free version, or perhaps a version that runs off of ads, and make it available to the public as a functional program. This is what I’m trying to prevent. I want only a single publicly released application derived from the source code that is owned by me to be found on app stores, etc. Is there an already existing license that does that or something similar?

I recognize that none of the following comments, answers, etc. are to be considered legal advice, and that anyone who responds to this question on this forum is free from all liabilities that could be associated with their advice.

I recognize that it would be best to send this exact question to a lawyer, but frankly I don’t think this software is revolutionary enough to warrant the expense. I’m just looking for something that already exists, as I imagine I’m not the only developer to desire a license like this.

Please let me know if there is a way I can improve my question in the comments below, and I will try to do so to the best of my ability. I am always looking for constructive feedback.

I’ve come across Graph Databases recently and I am wondering how much sense does it make to use in my scenario and I’d like some more expert advice on it.
I am building microservices for an application and I am currently using Postgres as my data source.
My simplest scenario is as follow: 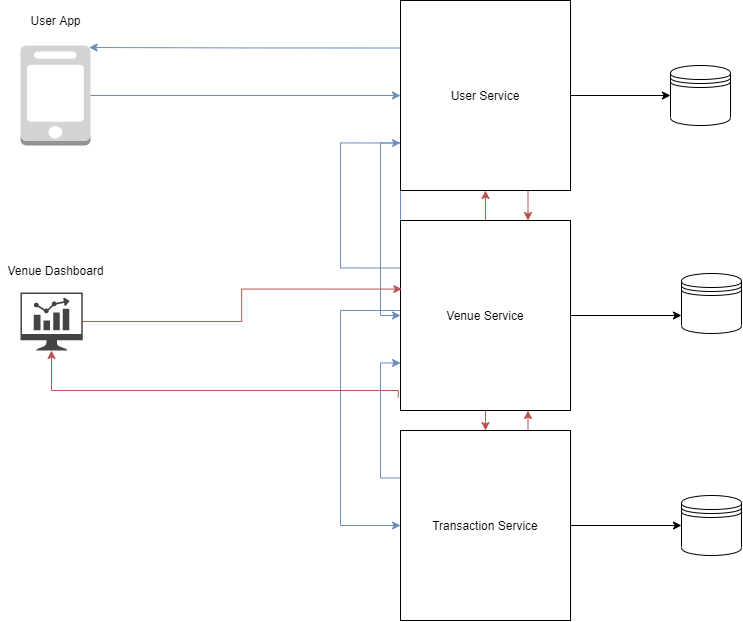 I hope it makes it clear that I would have to query and assemble a lot of the data on the fly based on the request needed. So for instance in order to get how many Bonus Points a User has for a specific Venue I would need to create a table in my User Service where I store how many more purchases a User has to do in a particular Venue to get Bonus Points and how many Bonus Points does a User have in a particular venue to spend and how many Rewards a User has redeemed from a Venue. So, yeah, it gets ugly very quickly. Considering then that I need the reverse as well from the Venue point of view for metrics.

Now it looks to me like a Graph database would be a great fit for this implementation, as every node has a direct relationship to the next node and therefore would be more efficient and less complex to query the data.

So I would have my REST endpoints which use Postgres to retrieve simple user data (such as name, email etc…) or venues data (such as venue name, co-ordinates etc…) and then use the user/venue id to query the graph database for the rest of the information. I could even remove the transaction microservice at this point. Something like this

What would be the actual Pros and Cons of this type of architecture? Does it actually make sense?

Thank you for your kind responses

I’m to assist someone to upgrade the hardware on a yacht. They currently have Active Directory, running on a Server 2008 machine installed on the boat.

They also have an Office365 subscription, with a number of hosted email addresses.

I plan to consolidate these two, and setup hybrid AD.

My concern is with the occasionally connected nature of the boat. I remember in the olden days that should an AD server in a forest not sync for 90 or 120 days, it would “tombstone”, and would need to be massaged back into the forest. The nature of connection on the boat (if at sea) would mean that there could be extended (i.e. 60+ days) where there would be no internet connection.

How does a hybrid topology handle this? Is there a max number of days that an AD server can be disconnected from the internet before it tombstones?