I’m in the process of migrating a school domain from Exchange 2016 to Exchange Online (Full Hybrid). I’ve noticed that in Outlook on the web, users are able to right click their inbox (or any other mailbox folder), click Permissions and give other users read and write access to their folders. I want to prevent pupils from accessing this feature, or at least prevent them from adding permissions/sharing their folders (I.e. read only access). Unfortunately, pupils occasionally enjoy trying to delete each other’s work etc so I think it’s best they don’t have access to folder permissions. 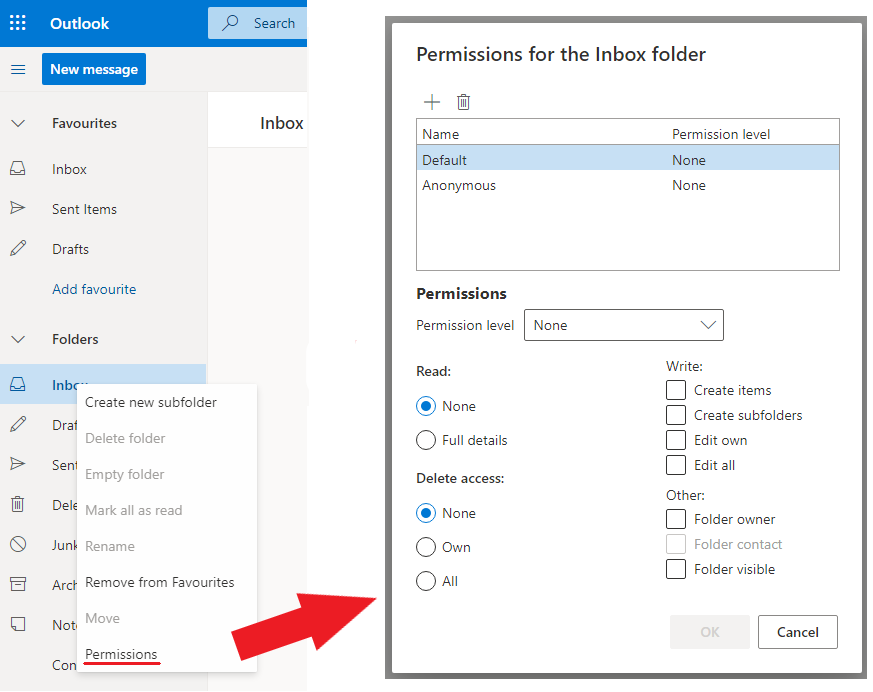 This didn’t work, so I also tried removing the following cmdlets to see if it would remove access to the Permissions feature altogether, but wasn’t sure if this would cause any problems.

I haven’t noticed any problems, but the feature is still accessible and the test account can still add, edit and remove folder permissions. I have checked that the cmdlets I have removed are not in the MyMailSubscriptions role (which I also assigned to the test account) and they are not.

As a test I ran the following commands and the Auto Reply settings disappeared from the UI a few minutes later, so the policy has definitely applied.

I also authenticated PowerShell as the test account I.e. Connect-ExchangeOnline -UserPrincipalName test@domain.com and confirmed that the account is not able to access the cmdlets which I removed.

Is anybody able to tell me how to get this working please, or if it is even possible?

when using vsftpd there is an option to hide files or directories that matches a certain pattern in the variable hide_files. Can something similar be achieved when using SFTP/SSH?

Want I want to do is to let people log in to a chrooted directory where only some specific folders are hidden. Once logged in the users can upload files, and download files in the available folders. Also another User can only read them.

I have done a chroot jail for Users, but this is not possible because some Users need to see all Folders in the Chroot Jail.

mail.app – As of 2Q2021 is any osx email client besidesOutlook that allows use of public shared folders in exchange? – Ask Different

Well, question summarizes it. I like some other email clients better than Outlook but none seems to be able to access the public shared folders in our Exchange server.

Luis Sisamon is a new contributor to this site. Take care in asking for clarification, commenting, and answering.
Check out our Code of Conduct.

A quick web search throws up eM Client and its web page includes “Work with your emails (including Shared folders, Public folders, etc.)”

I expect there are others.


Not the answer you’re looking for? Browse other questions tagged mail.app email ms-office .


I am having this use case:

A then can see the shared folder within Shared tab of OneDrive for business. A can access the shared folder from that or from the link in A’s Outlook inbox. By opening the link, A can then create folders, upload documents,… within that folder.

Now my question is, whether it is possible to do those actions (create folders, upload documents,..) inside that shared folder programmatically, e.g using SharePoint REST API, Microsoft Graph API,…?

I read through some documents related to SharePoint REST API, Microsoft Graph API,.. and it seems like those API are used only for accessing SharePoint sites’ documents within user’s tenant, not from a remote tenant. Am I correct?

Please let me know if you have any information about this, many thanks!

I have two folders, Controls and Patients within each of them there´s several folders, one of them called Runfirstall. I have the next code:

Which fives me this error:

Why is this incorrect?

I’m working on an upgrade to an application and I need to delete all of the files in several folders so that the the files are regenerated when users login. The file path is Master#(where # is the workspace no. in the app)MRHomepage. The issue is, there are 136 MASTER folders, so I wanted to see if there’s a way to run a script to go into each of these folders and delete all of the files.

So to summarize it, I want to have this script go into each dbMaster#MRHomepage folder and delete all of the contents. I know how to do this for a single folder but not for each folder through the same script.

Is there a way to wildcard the MASTER# in the url link? I don’t want to delete anything other than what’s in the Homepage folder.

I have a Windows 10 PC. I don’t want anyone to grab my private data stored on my PC even if they manage to get my login password.

Earlier, I used software that can easily get rid of any administrator password of the OS and log in.

Is there any kind of software or method to wipe our personal data on any sort of unauthorized access to a system?

After substantial research I could not find any solution for this seemingly simple implementation of the Bitcoin-Core app.

Here is what I am trying to achieve:
Running a full node on one computer require up do 400GB of drive storage. It appear, after all my research, that if one wants to access more than one wallet from the same computer, it would be required that each wallet be run from a different folder altogether, otherwise the Bitcoin-Core will act strangely, refuse to launch, or ask the user to create a new wallet altogether. Add to that, would also be required that each wallet be launched with a different shortcut, which is well acceptable.

I am running a Windows 7 computer that can hold 1TB on a secondary data hard drive. The first drive is an SSD and is strictly utilized for the OS and software installation. Holding the whole bitcoin blockchain is OK but holding 2 copies or 3 is out of the question, besides would be kind of ridiculous since X times 400GB of the same data makes no sense.
What I am trying to do is be able to launch a different wallet via its own shortcut. After several experimentation the only way I found to do this would be that every time I want to run a wallet I have to replace a whole bunch of files related to that wallet into the bitcoin folder. This is a tedious task and a relatively unsafe way to do things. Such practice is prone to errors and could potentially be risky to lose some bitcoins.

I’ve experimented with the shortcut option

but this doesn’t work for some reason. The parameter is completely ignore without generating any error. The only way I found that could work would be to maintain the whole blockchain 3X into 3 different folders and launch any of them with the appropriate shortcut. An option that require 1.2TB and makes no practical sense since it is utilizing so much hard drive memory storage.

So here is the question:
How can I store a specific wallet located in FolderA that is completely different then D:Bitcoin
(were D:Bitcoin would be the complete blockchain location) ?

If I could do that then I could also create any number of FolderB, FolderC, FolderD that would hold my different wallets and that I could launch any of those wallets ( not simultaneously ) when I need to do a transaction. All these folders could store the wallet files but not the whole blockchain.
Thanks for your help

I have operations that work on these folders such as:

How can I get FolderCollection that takes all of the folders or read it by batches of for example 500 folders?