Looking to convert an epub to mobi with calibre:

The file was readable and converted to mobi fine with an online converter. The converted file loaded on a Kindle fine, so there’s presumably no problem with the epub itself. The book is readable on the Kindle, converted fine.

How is this accomplished from the console using the flatpak install of calibre?

note: the GUI for calibre reads from the home directory fine and adds books to its library. This book is, in fact, in the calibre library. The scope of the question is just how to use the conversion script for the flatpak install of calibre.

There’s nothing odd or unique about permissions to directories, it’s a vanilla install. Presumably some flatpak weirdness.

I am using https://www.cypress.io/ for react components e2e testing. The CypressJS could not detect the installed Chromium on my computer, because I have installed it with flatpark.

One of the contributor of CypresJS told me the following:

It appears that we do not currently support flatpak browser detection
due to flatpaked programs not appearing in path. If you can assign
flatpak run org.chromium.Chromium to an alias or a standalone
executable in $PATH, the autodetection may work.

Is it possible to assign flatpak run org.chromium.Chromium to an alias? If yes, then how?

I recently installed both versions of the same application via flatpak (QGIS, “stable” and “lts” branches). After installation, however, I could start only the last installed version (branch “lts”) from the application menu (KDE). I can instead start both versions using the terminal with:

How could I be able to use two different icons that work both in the application menu, in the taskbar and in the dock?

As the error message implies, ‘update-alternatives’ deals with file paths, not with runnable command lines – it needs to be given an actual file that it would place at “/usr/bin/gnome-www-browser”. (The alternatives system doesn’t even distinguish whether something is a program or not.)

Flatpak provides executable links of every program at /var/lib/flatpak/exports/bin (one per flatpak ID, corresponding to its default branch), so you should be able to use:

Otherwise write a one-line shell script, put it somewhere in /usr/local, and give that to update-alternatives.

When I install a package, I like to see what it’s installed. With apt I can use apt-file show, with AppImages I can view the mounted filesystem, and with Snap I could mount the snap without running it to see the contents.

How do I do the equivalent with a flatpak? Preferably, before running it?

Using Ubuntu 20.04. When a program is missing, for example curl, the command line suggests to install by sudo apt install curl. Sometimes it’s snap or flatpak instead of apt.

What is the reason there are so many ways to install an app?

A brief introduction about me
I just installed Feren OS (which is based on Ubuntu if I'm correct). As a web developer, I work with the Linux and Unix command line on a daily basis, but only for fairly simple things. So I still consider myself a Linux newbie.

Introduction to my question
The question I'm about to ask has been asked before (I have googled it). However, the situations mentioned seem to be a little different and the answers provided did not solve my problem.

As mentioned above, I use Feren OS, so my problem may be specific to that distribution. I am asking my question here on AskUbuntu, because my goal is to learn a lot about Linux and this is one of the largest communities. So if this is the wrong place to ask this question please say so but otherwise I would appreciate any help.

My problem
First of all, I installed Apache2 from the command line (using apt). I have created a fully functional job website at / var / www / projects / some_website / web. This part is also what I am familiar with for my daily work.

I have also installed PHPStorm (flatpak) from the store. The store itself is (depending on your box) a custom Feren OS store. However, I would say that has nothing to do with the problem I am having.

In Feren OS I am logged in as user "paul".

Now when, as user "Paul", I open the terminal, I can go anywhere. For example, I can go to "/ var / www". I can create directories there, share them, etc. As I said, this part I am familiar with.

However, from PHPStorm I can go to "/ var", but I can't see all the directories there. Even when I type "/ var / www" in the address box there, it can't go there.

For comparison, I also opened the text editor Kate. This program can access "/ var / www" as you would expect. 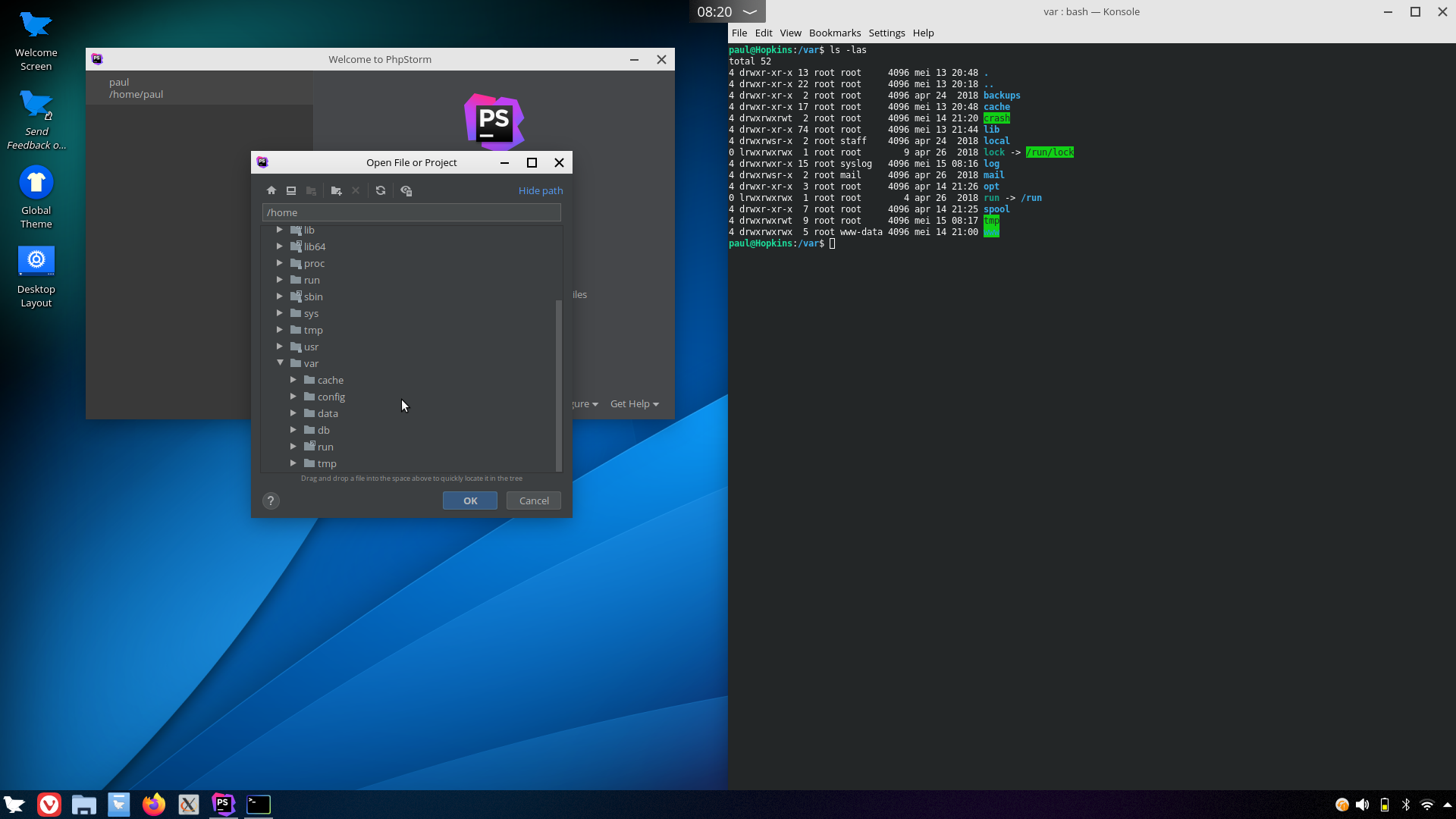 What I tried to fix
The answers I found on the internet mainly mentioned that the user should be added to the www data group and / var / www / should belong to that group.

While I consider this solution to be pointless in my case, I did try. I think it doesn't make sense, because other applications running under the same user can access the directory.

To be safe, I have added user "Paul" to the group "www-data" and have chosen / var / www to that group, as you can see in the attached screenshot.

My questions
1. What is the difference between PHPStorm and Konsole and Kate? That makes PHPStorm unable to access / var / www /, while all other tools do.

I am simply trying to install Spotify with flatpak install spotify. Here is the output:

A list of dark permissions, fine, but after that? A numbered list of identifications? Op i/u? I don't know what you are trying to say. Will realize un install operations ..? At least the permissions section had a header.

I looked at the reference documentation for flatpak install but found no description of the output.

In addition, after accepting the above without knowing what it meant, the installation process is constantly interrupted and requires me to authenticate, which forces me to stay and monitor the entire process. Why do you ask me to authenticate again and again instead of just once? I just aborted the process after 3+ authentications since I don't feel like taking care of this thing ...

I am using the version of Bitcoin-Qt 0.18.1 that comes with Flatpak. I've searched the Bitcoin datadir, which is in ~/.var/app/org.bitcoincore.bitcoin-qt/data/ and there is not .cookie file there. This prevents me from running Electrum Personal Server.

My distribution of Linux is MX Linux.

My bitcoin.conf it is empty.

I am trying to make Flatpak Libreoffice the default application to open files in Thunderbird.

At the moment, Thunderbird (also a flatpak) is using the default system controller. I tried to change it but I can't find where the libreoffice executable is on my system.

Where are the flatpak executables?