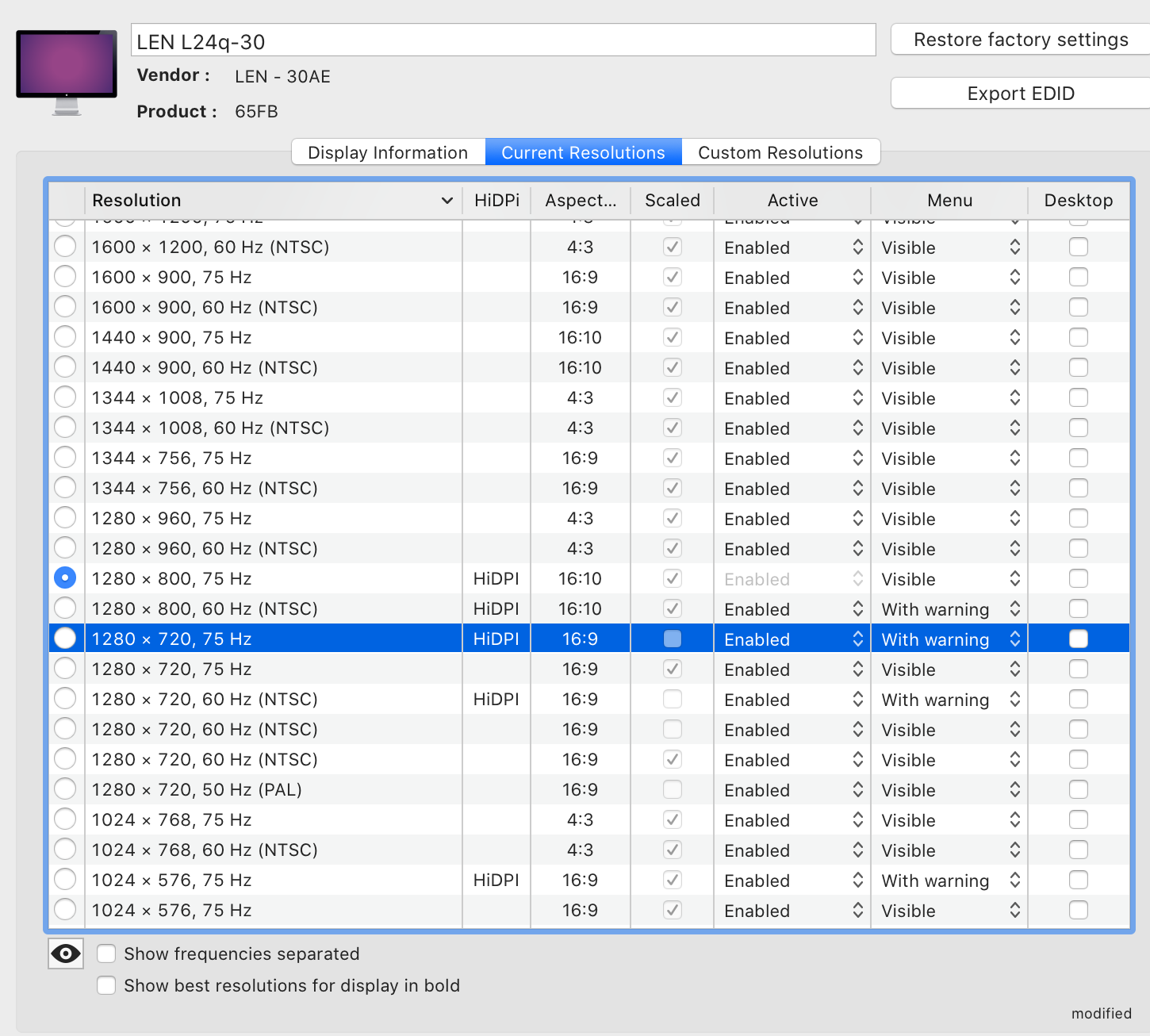 In SwitchResX, I can see the 1280*720 HiDPi option but notice that the “scaled” checkbox is unchecked while it should be checked, and selecting it doesn’t do anything.

Can anyone spot the problem here?

i’m working on a project where i’m going to link 2 devices together, one desktop and one android, desktop is going to send mouse coords / keystrokes to the android device and it will simulate mouse moves / keystrokes. Is there any way to do it? Searched on google but no dice.
pseudocode:

I am using SSDT to create a database containing CLR user defined aggregates.

The aggregates are intended to sit in different schema. That is not possible with CLR objects inside SSDT, without using a post-deployment script to move the objects after deployment.

What I am attempting to do is:

I then create a wrapper in the Stats schema like so:

This works without error when I build via debug. I have my debug connection set to a named instance of SQL Server. If I press F5, it compiles and deploys without any problem. The code is now usable on the server, including the wrapper.

But, if I attempt to publish to a server using Publish, it does not work. Instead it fails with:

There are no further error messages either in the Data Tools Operations panel or error list. ssdttrace shows no useful information:

Previously I was also getting errors indicating that the assembly AnalysisFunctions had an unresolved reference due to the use of EXTERNAL NAME – again working via debug, not via publish. But now that error has mysteriously vanished.

Does anyone have any idea what this error might be, or how I can debug it?

In a 2D downhill game with the following, custom movement code, how do I apply external effects to the player’s movement?

For example, when the player hits an obstacle, I want them to get bounced off the obstacle and briefly stop before they are able to continue moving. How do I best integrate those types of external effects into my movement code in a way that is scalable?

My player-obstacle collision is handled in the obstacle class, and I am using an action to notify the player about the collision. So I have the ability to have a corresponding method in the player class that get’s called when the collision occurs:

However, I was hoping for a better, more scalable way?

PS: I would like to keep my movement code custom, so no Unity physics / AddForce / etc.

Update – Here is my attempt:

The following works. However, I am wondering if there is a cleaner / more systematic / more scalable way to handle this?

But the two external monitors mirror each other, I want them to extend

but the two monitors just mirror each other and don’t extend.

the mirroring check box is not checked

The thing is, I need the mobile app to only get the authorization code and then send it to the server since the server will call the Spotify web api when needed.

Here’s a diagram of what I’m thinking: 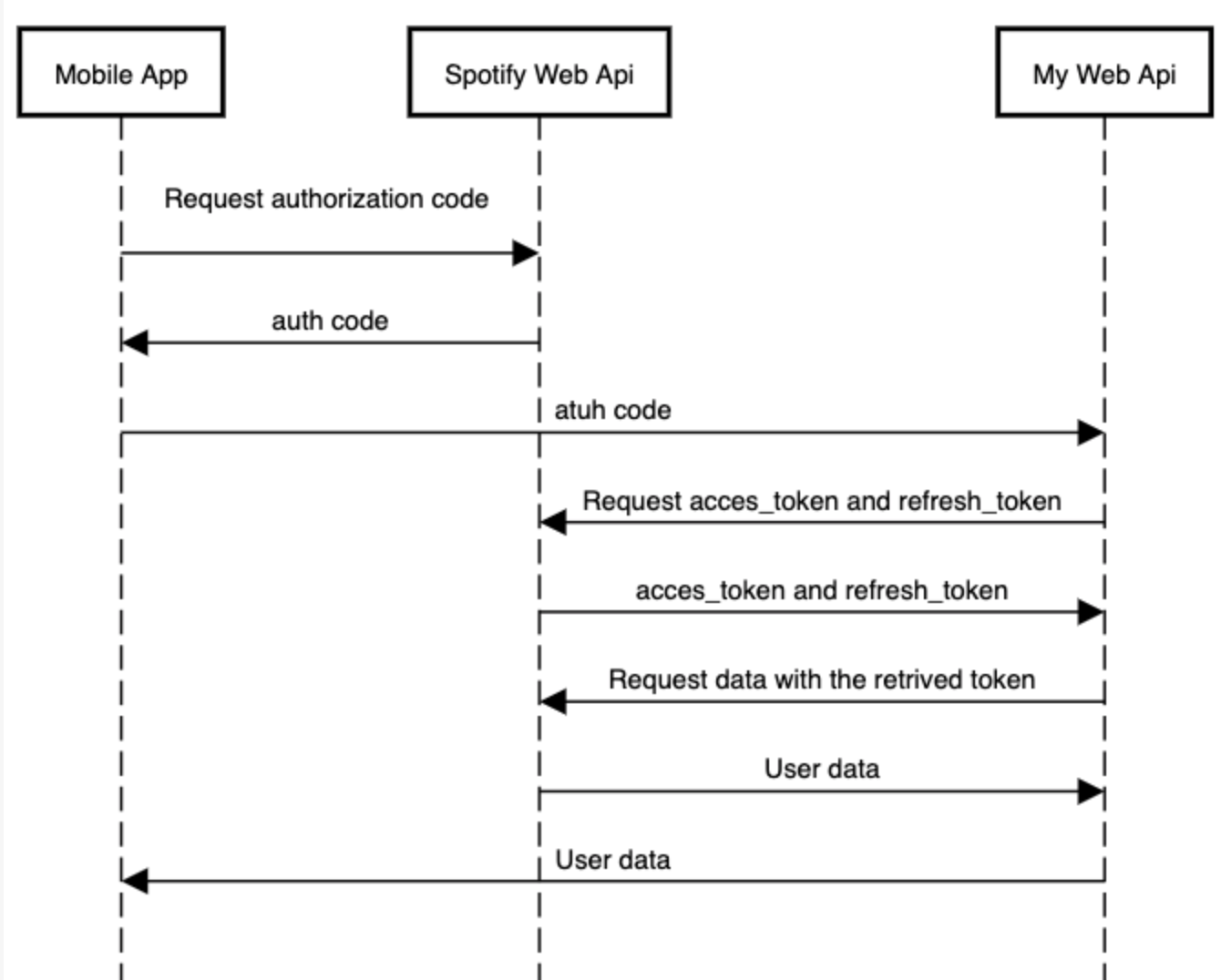 Reading the Spotify Documentation I’ve seen that they also recommend using PKCE when building mobile apps. But I’m not sure how this would work in my case. I would need to generate the code_verifier in the mobile app but also send it to my server.

I guess my question would be, does my flow make sense? Is it ok to store the user’s access_tokens and refresh_tokens in my DB and use them as needed?

Quick backstory, I formatted the partition using Mac OS Extended (Journaled, Encrypted), copied everything from another drive (that this new one is replacing) and was happy as 🙂 However, I accidentally started decrypting it when I set up TM, so I’ve spent the last 3 days waiting for it to decrypt :/
Now I want to re-encrypt the drive again, without formatting (as I don’t have access to the previous drive anymore), but I don’t have a Finder option to encrypt when right-clicking the partition.
I’ve read that this can be caused by using the wrong type of partition map, however in Disk Util the parent LaCie drive shows Partition Map: GUID.

Is there another way to encrypt the partition without formatting?

I have the following source code which is supposed to start a process for you in an async way (i.e. letting you add a cancel token):

I have written the code to get some feedback on the use of SemaphoreSlim. I suspect it’s not ideal but I would love to hear your arguments.

This is not a production code it is not necessary to point out, for example, that @"C:WINDOWSsystem32ping.exe" should be a parameter.

I have a 2015 MacBook Air and plan to triple boot MacOS, Arch Linux and Ubuntu by installing Arch and Ubuntu onto my SSD. I have looked at this thread and read about installing rEFInd onto the SSD so that the default macOS bootloader is left unchanged. I have also read through this article and plan to do something similar.

From the article I have read that you must install Windows first before installing Ubuntu. I completely understand how to install Ubuntu after installing Windows.

TL;DR: Trying to triple boot Arch and Ubuntu from an external SSD using this article but I am unsure how to install Arch Linux first instead of Windows.

Note: I am fine using other methods of triple-booting Arch and Ubuntu as long as it doesn’t make changes to my mac.

How would I test an OpenVPN environment from external, kind of black box pentest.
I have the public server-IP (port 1194, udp, tun).

I have found NO online ressources on how to do that, or whether some tools are available (e.g. for IPsec there is the ike-scan tools), nmap has no scripts for that, metasploit has no plugins, kali has no tools (only OpenVAS looks like it has a module, didnt try that yet).

Is there any way to test or analyse the security of OpenVPN from an external point of view?