We have a SharePoint 2019 on-premises instance. We currently are using a workflow which will create a new folder in a Document Library within SharePoint and then files are copied into this folder. We want to start using a Shared Drive on the network to copy files into, vice a document library.

If I have a SharePoint List called “Discovery Request”, the List contains numerous fields but we have renamed the Title field to be ‘CaseID’. What we need to happen is when a user submits the new item on the form and saves it, the “CaseID” field should be used to create a new folder on the Share Drive in a designated directory (i.e. Dropbox for Discovery Requests).

Is there a java script or Rest API command to make this happen directly from a Content Editor from the “Discovery Request” list?

One of my developers mentioned using _api/web/getfolderbyserverrelativeurl(‘{0}’)/folder/copyto(destinationpath).

I just don’t know where to start or what else is needed. Please help.

The best external hard drive and SSD to buy for 2020:

I have a Windows Server 2016 machine hooked up to a few assorted drives, some of them through a PCI-E SATA card (not a RAID card). I’m trying to set up the storage pool of these drives in a simple layout and fixed provisioning for maximum storage and speeds as I do not need hardware redundancy (important data is already backed up).

When setting up the virtual hard drive, Server Manager will not allow me to use the entire available storage – will only allow about half of it. I’ve overcome this limitation with the method explained here with this Powershell script:

And it seems to do the trick. The problem is – when copying all my data from that 2TB drive I get a burst of great performance (around 100-150MB/s) for a few seconds, and then the disk activity goes straight to 100% and stays there. However there is no actual read and write operations, and the Virtual Disk’s response time is in the tens or hundreds of thousands of milli-seconds. Every so often there’s a spike in performance and some data is written into the disk. I’m copying around 1.6TB which is running for 3.5 days now and only copied 57%. Most of the data is movies and TV shows which are files that are naturally, on average, over a gigabyte in size. Also as seen in the images below I’m copying from Disk D and it has barely read speeds – the bottleneck is Disk E which is the storage pool.

I should note that I’ve paused the copy process and tried to stream a movie over the network and it seemed to work just fine, meaning the problem is only with writes, but I still don’t have precise benchmarks of read speeds just now.

Is it a specific faulty drive? If so, how can I tell which one?

Would love any advice. 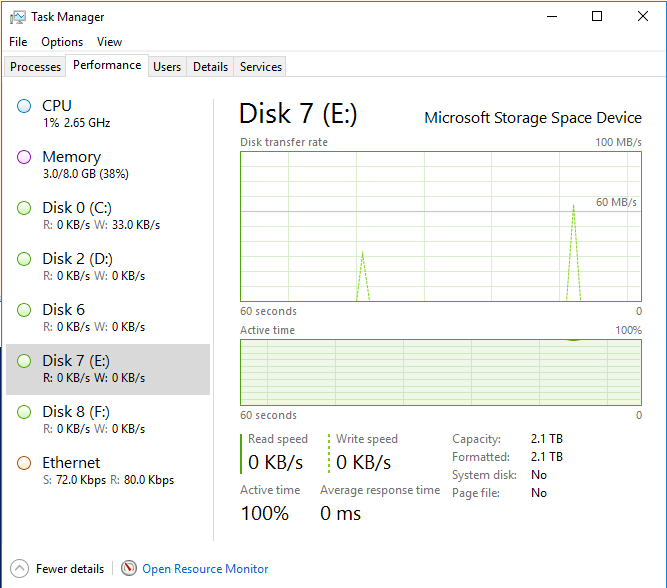 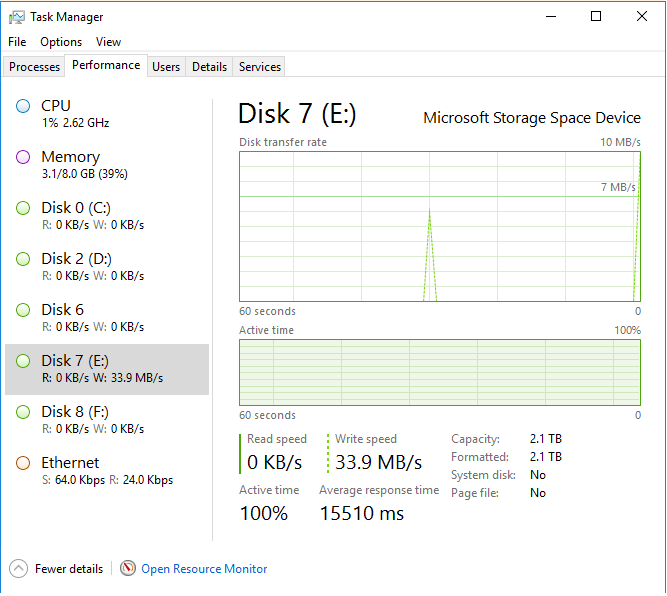 We are planning a motor-home trip to Switzerland where the plan is basically to do sightseeing and staying away from crowd cities.

I would like to ask if it’s safe/doable in general to drive motorhomes (more than 7 meters long) in the mountains during winter? Assuming the driver isn’t an expert in motorhomes.

I know the question seems very naive, but I think it is also extensible to the quality of the roads in Switzerland during winter for this kind of driving. Since I don’t know many people who drive motor homes, I am worrying that a plan like this is completely crazy and should not be pursued, so I would apprecite input from others, whether this is reasonable or not.

I’ve been looking in to UEFI secure boot. Can UEFI secure boot be used in this way? My research is inconclusive. I may be able to sign the bootloader, kernel and applications, but is there a more wholistic approach of signing a disk?

If it is in fact possible, can you please provide details. If not, is there an alternative way to achieve this?

I’m getting an M1 MacBook Pro from my employer which only has 512 GB of flash storage (my 2018 MBP has 1 TB), so I’ll need to move my 350 GB Photos library to an external drive. I know that I could have Photos optimize for storage (I do have iCloud Library), but I think it’s best to have the full-size Photos library stored somewhere.

Would it be okay to store the Photos library on an external thumb-type flash drive from a reputable manufacturer such as SanDisk, or should I stick to a more conventional external USB flash drive, such as the SanDisk Extreme series?

Based on my research so far, I have noted the following:

So, bottom line, I wonder if it’s worth my time to troubleshoot this. I wonder if there is any prospect of expecting dates to accurately a two-way sync if I am updating content on iCloud from an IOS device.

Just subscribed to the 2TB package of Google Drive to try to backup my Mac “continuously”. However, within hours the 80GB+ of space I have on my Mac has now decreased to 20GB, and I am getting the out of memory errors.

I do not have sync checkboxed, but it seems that there is a lot of unnecessary previous local solid state space being lost here? What can be done?

At my school, I use A USB stick to store my data and bring it home. But when I am home, I would like to integrate the new USB data into my personal File-System.
There are two main directories in which I work. I would like to copy everything new to these dirs.
I thought about bash but I don’t know much about it.

So I hope to get some ideas and/or resources that could help to develop a solution. (hand-copying is stupid)

I created a new dynamic vdi disk. Then, from within the guest, I used fdisk to mkfs.ext4. I then shut down the guest and saw this in my vbox: 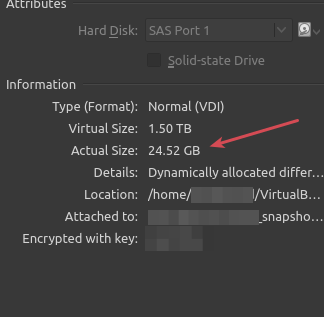 The only thing I saved to the disk so far (Before shutting down the guest) was a text file with the text : Hello World

I also had created a snapshot before checking the space.

Why did it write to so much sectors and how to prevent?