A pi-hole instance is also acting as the DHCP server in my network. I assigned static IP addresses for some of my devices (eg. an octopi server with Hostname "octopi" and IP address "192.168.1.40"). The pi-hole domain name is set to "lan". But when trying to ping "octopi.lan" from my computer (where the pi-hole is set as it’s DNS) the name cannot be resolved. Are additional configuration steps necessary?

I have a AWS ELB to the gateway of an internal service.

I have some other host names that I need to be resolved to the same address as the ELB DNS name.

In my current set up, I’m using /etc/hosts to manually point the names to the IP address of the ELB.

But the IP of the ELB changes once in a while and I’ll have to update /etc/hosts again and again.

Is it possible to just tell my operating system to just resolve the specified host names as like I’m querying with the ELB DNS name?

I was thinking that sometime in the future I might migrate the website database, filetree and email hosting to a generally non managed VPS hosting (such as Linode, DigitalOcean), because such hostings tend to cost less and be faster, but, for sure I wouldn’t want to start doing crazy email DNS record configurations also.

As you can’t set CNAMES using local hosts file, I needed to setup a simple hosted DNS server we can point at so our team can see a beta version of our system which happens to be on AEM CMS which uses fastly and requires CNAMES to access.

at the top of the resource overview, it shows

If I use ns1-08.azure-dns.com as my dns server, and query mytargetdomain.com it gives me the live A record IP, not the CNAME I just setup.

I must admit I don’t know much about DNS and SOA etc, but there really isn’t anything else which can be configured or edited. 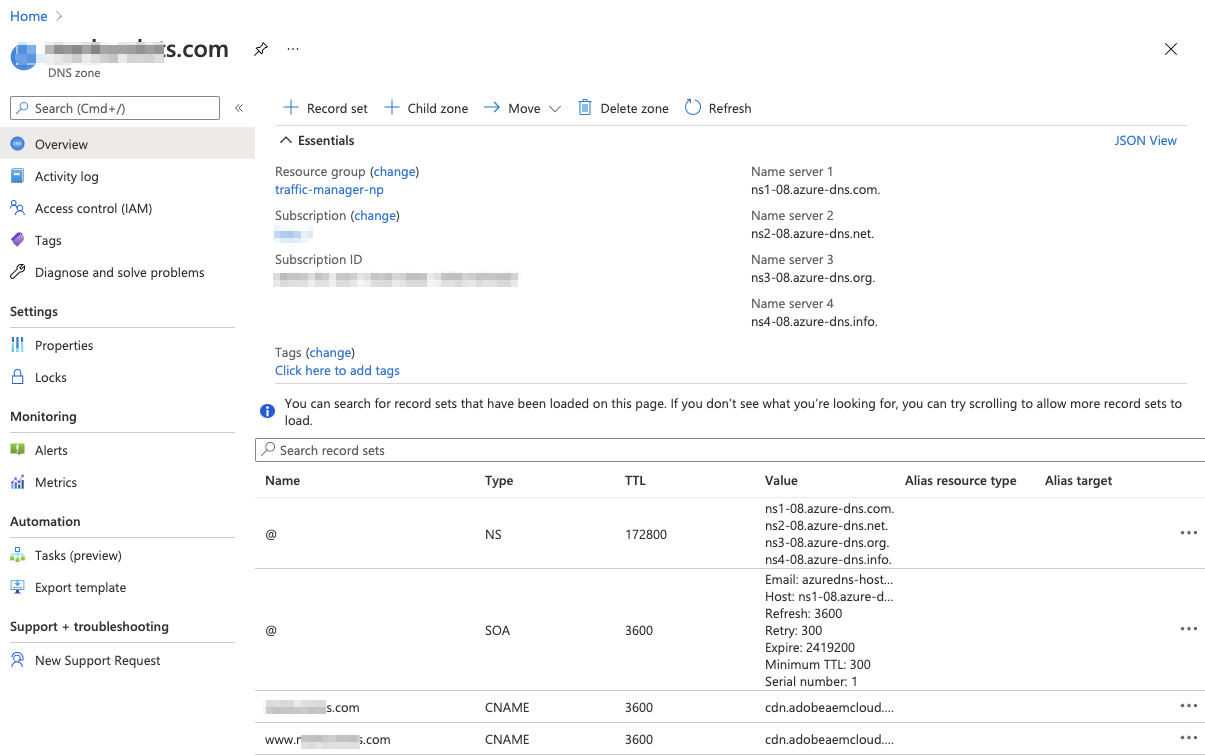 I have been struggling with this for a few days now, and am really at my wit’s end. Our infrastructure is very heterogeneous with a mix of hardware devices and virtual machines running a variety of operating systems. This issue is present in situations where “fixing it on the client” is simply not an option, so please, no answers in that vein.

The TL;DR is that I cannot figure out how to simply enter a DHCP reservation with a MAC, IP, & hostname that is “static” for lack of a better word. Nothing I do will allow the DHCP server to create the DNS record while also preventing the DHCP client from changing it.

For example, our fiber channel array controllers have dual NICs for redundancy, with auto-generated hostnames that cannot be manually configured. In our old setup, I simply made DHCP reservations for their MAC addresses with host names such as “array1ctrl1” and “array1ctrl2”. The name & IP were automatically entered into DNS with at matching address when the DHCP reservation was created.

The Microsoft DHCP server works differently. It does not create a matching DNS record until the DHCP client requests the lease, and when that happens, it updates both the reservation & DNS with the (unwanted) client supplied hostname.

There are similar issues with other bits of hardware and software that all boil down to the same overall issue — the seeming inability to create a DHCP reservation with a specified hostname and have it remain as entered regardless of how the DHCP client identifies itself.

After a lot of trial and error, and as much google searching as I was able to stomach, it’s starting to appear that this is simply impossible to do in a MS DHCP server. If that’s the case, so be it, but I’d like to know for certain if so.

We have a MVC site that uses CSS, JavaScript, SQL Server and REST API’s. The page loads are slow. I have tried turning off several resources based on Chrome Lighthouse as well as Firefox Developer Tools. But the slowness remains regardless of the page.

It’s hosted as Azure app service and CPU/Memory resources are usually around 20-30% which lead me to believe that’s not the problem either.

When I curl the website address, it takes just as long as the browser takes. Could this mean a DNS issue? Are pointers to find out networking issues?

I have a VPS server and just installed apache.
when I enter the IP address in browser, its showing default index.html.

As you correctly identified, there are two types of seed nodes, i.e. DNS seeds and seed nodes. DNS seeds are stored in chainparams.cpp. As of today (September 2021) the following nodes are listed in this file.

I performed nslookups on these DNS names and they return a list of IP addresses that all seemed to be running bitcoin nodes.

There is also the concept of seed nodes which are hardcoded IP addresses in the event that someone is experiencing a DNS failure or other issue. These nodes are only contacted if no other discovery mechanism works.

You can also use -seednode option to connect to a node (IP address) to retrieve peer addresses, then disconnect.

This was answered by dhruv and sipa on IRC.

-seednode: a peer node that is only asked to respond to GETADDR.

(This is the bootstrapping mechanism used for Tor nodes.)

DNS seeds are names that resolve to the IP addresses of good full nodes. The set of IP addresses you get back changes all the time.

Proxied internet access + DNS seeds => One domain name resolves to one IP that acts like a -seednode.

BOLT 10 describes a node discovery mechanism based on DNS.

The query semantics include a realm byte that is 0 by default (Bitcoin). What is the realm byte for testnet and signet?

This question was originally asked by Sergei Tikhomirov in the comments of this question.