I couldn’t tell you the exact time when this started, nor exactly all the things I’ve tried since, but I never had this kind of issue before, and I’ve been running it for a long time on many installations.

First of all, it gets stuck at “Done loading” in the GUI box showing forever until it actually goes into the actual application.

Secondly, once it is actually displaying the GUI, it says “48 hours behind” or “2 days behind” every day lately, until it finally is done syncing. The thing is, I never keep the computer off for longer than maybe 8 hours, so it’s not possible for this to be accurate.

Other than the merely practical inconvenience, this disturbs me on a deeper level. I’m witnessing how the entire desktop computer as a concept is being killed off and abandoned, and it truly frightens me as I don’t see any alternative. The “smartphones”, “tablets”, etc. are nothing but pure spyware devices, fundamentally crippled and gives me an extremely bad “vibe”. I don’t want Bitcoin Core to also fall into pieces and become so unstable and buggy that it’s unusable.

I’ve also several times tried deleting a ton of files in the data dir (except the blocks, and while Bitcoin Core is not running) to make it “reset” whatever internal statistics may be messed up, but nothing helps.

I’m frankly not up for “troubleshooting” at this point, but merely trying to figure out if others know what is causing this for sure and have experienced the same thing.

(I can’t ask on Github because that site doesn’t allow accounts to be created, like most sites today.)

What could possibly explain this very strange behaviour?

If you watched Fabian’s presentation (or read the transcript) you’ll have seen that he said you can use Valgrind for memory leak checks and that it can be used similarly to lldb.

There is a section in Fabian’s doc on debugging Bitcoin with instructions on how to install Valgrind on MacOS and run it.

Valgrind has also been added as flag to the functional tests in Core in PR #17633 so you can run:

The --valgrind flag is documented as a Valgrind memory error detector and that you should expect at least a ~10x slowdown with Valgrind 3.14 or later required.

In that PR practicalswift states:

Regular functional testing under Valgrind would have caught many of the uninitialized reads we’ve seen historically.

Another great resource is a Bitcoin Core PR review club session (hosted by Jon Atack) on running the unit tests under Valgrind. In the notes for that session it describes:

Valgrind is a debugging and profiling tool suite to make programs faster and more correct. Its most popular tool, Memcheck, can detect memory-related errors common in C and C++ programs that can lead to crashes and unpredictable behavior. Here is a tutorial. Memcheck is not perfect: typical slowdown is 3-10x, memory usage is 2x, it can produce false positives (there are mechanisms for suppressing these; see the valgrind.supp file in Bitcoin Core), and it doesn’t currently detect out-of-range reads or writes to arrays allocated statically or on the stack.

I hope that I can get you or someone else familiar with the licensing of Bitcoin Core to assist me. You can reach me at mark.radcliffe@dlapiper.com

I am writing a chapter in a book entitled on Free and Open Source Licensing by the Oxford University Press. I am writing a chapter on blockchain and open source. The audience is lawyers who are familiar with open source but not blockchain. I am seeking a review of two pages on Bitcoin (including Bitcoin Core) on open source to ensure that it is as accurate as possible. You can see the two pages below. I am using a scan by BlackDuck of the relevant repository so I am comfortable with the list of licenses but I am interested in any additional information you can provide on the background of the clients, the selection of the license and how the contributions are managed to ensure that they have licenses compatible with the “Project License” of MIT. Please feel free to propose changes to the draft. OUP is hoping to get the draft next week and I hope to get your comments early next week.

Bitcoin is the first blockchain and is based on the Bitcoin Whitepaper by Satoshi Nakamoto (who is still unknown) which was published in 2008. The original Bitcoin client was released on January 9, 2009. This history of Bitcoin and its clients is complex and opaque. Bitcoin.org lists 54 Bitcoin clients. The chapter will review two of the more commonly used clients.

Bitcoin Core was initially named Bitcoin-Qt. It was the third Bitcoin client and developed by Wladimir van der Laan based on the original reference code by Satoshi Nakamoto. Bitcoin-Qt version 0.5.0 was released on 1 November 2011. Bitcoin-Qt introduced a front end that uses the Qt user interface toolkit.
Bitcoin SV (Satoshi’s Vision) is a fork of Bitcoin Cash client. Bitcoin Cash was released on August 1, 2017 as part of the “bitcoin scalability debate.” The hard fork of Bitcoin Cash resulted in two competing coins – Bitcoin ABC (Adjustable Blocksize Cap) and Bitcoin SV. The fork was due to a disagreement over how to best solve the problem of “scalability” in the Bitcoin blockchain. Bitcoin SV was led by Craig Wright who claims to be Satoshi Nakamoto, the original developer of Bitcoin.

There are basically two separate uses: the block index which is essentially metadata and the UTXO database.

The dbcache is not really a cache, it’s a write buffer and it prevents needing to sync the disk or make random writes. As a cache it doesn’t do much and isn’t needed for that. It does also act as a cache, but if you nullify that benefit it’s only approximately a 10% slowdown even with a huge dbcache.

With a fast SSD (e.g. NVMe) I think the difference between a 400MB cache and a 5GB one is “only” a halving of IBD time (when syncing from LAN peers).

To prevent corruption the database updates must involve synchronizing writes.

We changed how dbcache flushing worked with the explicit intention of making background flushing possible so that it could be concurrently flushing and processing blocks constantly rather than inserting these bubbles where it waits on the disk. Even though the consistency requirements make that possible now (the UTXO database doesn’t have to be consistent except there is a record that states that all blocks before it have absolutely positively been applied to the database), actually making the change is still extremely complicated.

Every time you process a block, once the cache fills you could flush out to disk the remaining dirty entries for the oldest remaining blocks until it’s back under the limit again.. So essentially flushing every block in the background. Then every once in a while, you do a disk sync and update the record that says where the completely consistent point is, without having to flush anything additional out. So almost no latency spikes at runtime.

This would be good for mining but doing that requires a bunch of machinery to efficiently track things and probably would make sense to replace the dbcache’s map with an open hash table of some kind at the same time to cut the malloc traffic down by 10x. I expect there is a factor of 2 IBD speedup waiting from these changes. I’m not sure if it’ll ever happen though, it’s a big complicated task and any mistake is a consensus bug.

You can even do neat stuff like resolve collisions in the open hash table by displacing the oldest UTXO and once you’ve gone “far enough” flush. The table could run extremely close to completely full at all times.

I’m personally fond of cuckoo tables. Where every item has a small number of possible locations like two random buckets which each hold 4 items and if those locations are full you pick one, insert the item there, bump what was in that slot into one of its alternative locations.

If the table has a little slack (no more than ~95% full for 2 buckets of 4 items for example) then it’s always successful at finding an empty slot after a few kicks. Lookup is extremely fast since you only need to do two random memory accesses. There are a bunch of different designs though most are best when you can keep the table <50% full but the cuckoo design is easy to take up to arbritarily high fullness.

The STL sets that Bitcoin uses are a hash table, but collisions are resolved by having each entry in the hash table be a linked list, so every access involves several pointer chases and every insertion takes a malloc.

(This question was answered by gmaxwell on IRC. It has been paraphrased and any errors are my own.)

Get Public Key from WIF (Python)

What is ccache? Can you provide some guidance on when to use it for building Bitcoin Core PRs and how to use it?

I have a running full bitcoin node (txindex=1). I also setup electrumx and it has fully synced with current blockchain state.

But when i run electrumx_rpc query , its returning like this :

But I have balance in that address. How to fix this?

I installed electrumx using this repo.

How to make good repository in layer so caller od repository methods knows what method returns.
If I have Student and Grades objects in database I can have one query:

GetStudentsIncludingGrades that shows that it will return Students with populated Grades list inside.
So it looks like this:

What I have some complex repository. I want to avoid to have methods like:

I can make it generic so caller can give me list of navigation properties that query must include but I don’t want that my service layer knows anything about Entity Framework internals.

As 0xB10C posts here you can get a peer dashboard to bitcoin-cli that looks like this. 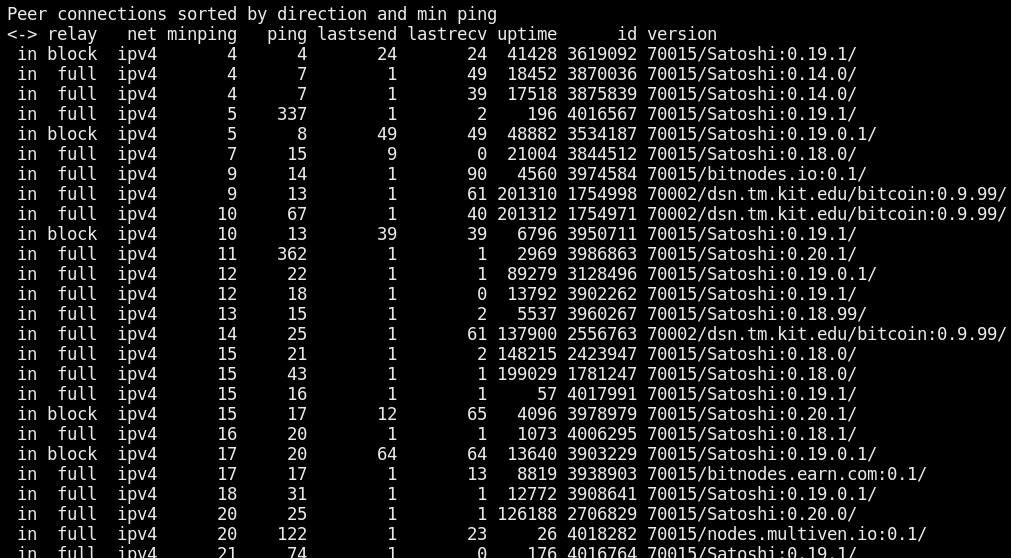 You can get this dashboard by using

and you can use the -asmap flag too.

This feature was merged into Bitcoin Core in September 2020 so to use it today you will either need to build master or wait for a future major release. (The feature was built by Jon Atack.)