I consider Eyebite a cool, but mechanically underwhelming spell for its level. I want to turn it into a balanced option. This question does not depend on if the original version is weak or not, I want to know if my new version achieves my outlined goals.

The classes to consider as users of the spell are: Bard, Sorcerer, and especially Warlock, who needs to choose it as an Arcanum, the only and unchangeable 6th level spell they’ll have.

The other spells to consider as comparison points specifically are: Hold Monster (similar effect on target at 5th level already, for Bard and Sorcerer up-castable to 6th level for 2 targets) and then as actual 6th level aternatives, Mass Suggestion and Mental Prison (in XGtE so paywalled link), which also can be used to take enemies out of a fight, and for which Mass Suggestion has great utility use as well. I don’t needs a comparison against the original version of Eyebite. You can also compare it to other spells up to level 6, if you think they’re relevant for the same role.

The goal of the homebrew is to make Eyebite an equal contender, when the character reaches the point where they can choose these spells.

Does this Enhanced Eyebite, description below, meet the above goal?

For the spell’s duration, your eyes become an inky void imbued with
dread power. One creature of your choice within 90 feet of you
that you can see must succeed on a Wisdom saving throw or be affected
by one of the following effects of your choice for the duration. On
each of your turns until the spell ends, you can use your action to
target another creature. If you target a creature again after it
has succeeded on a saving throw against this casting of Eyebite, the
creature has advantage on its saving throws.

Asleep. The target falls unconscious. It wakes up if it takes any
damage or if another creature uses its action to shake the sleeper
awake.

Panicked. The target is frightened of you. On each of its turns, the
frightened creature must take the Dash action and move away from you
by the safest and shortest available route, unless there is nowhere to
move. If the target moves to a place at least 90 feet away from
you where it can no longer see you, this effect ends.

Sickened. The target has disadvantage on attack rolls and ability
checks. At the end of each of its turns, it can make another Wisdom
saving throw. If it succeeds, the effect ends. If it fails, it takes
2d8 points of necrotic damage.

Notes: Changes to the original are highlighted for the benefit of those who know the original spell, even though comparison to the original is not what I’m asking. The duration is increased to give this spell more utility, and ability to last for several encounters. The range is increased to match Hold Monster. The damage is added to the Sickened effect, so it wouldn’t be strictly inferior to Panicked, which also gives the same disadvantages with different and arguable much stronger conditions to end the effect. Scaling with level is added to keep the spell competitive at higher character levels. The ability to target the same creature again is given so the spell doesn’t become useless if all enemies succeed at their saving throw, but disadvantage is given so that in most situation it’d still be better to do something else than keep spamming Eyebite at disadvantage.

I am starting a project in which I will be translating observed floating point values into specific color palettes. I found a previous post from 2013 in which a fixed range was translated into a red-yellow-green palette.

Borrowing on the answer from that question, I updated the JS Fiddle to translate a dynamic range into the R-Y-G palette. Does anyone have an example that accepts either static or dynamic ranges and dynamic, especially non-primary, palettes?

I am trying to finish this class with Comparable interface but it keeps showing an error like this.

So, for research reasons, I am interested in the explosive yield of the SRD’s Hellball with its 40d6 damage over a 40′ radius. However, I have come up with two wildly disparate results based on the path taken, so I believe there’s a logical issue somewhere, but my math pointed me at an odd result, namely that d20 Future uses a different “scale” of hit point than a regular fantasy D&D 3.5e game would. Is this correct, or have I gone awry somewhere?

As pointed out by Hey I Can Chan in an answer to a similar question, the Nuclear Missile from d20 Future, with its said-to-be-1MT warhead, does 16d8 damage, which is roughly equivalent to 21d6 according to his translation of the damage dice. Extrapolating linearly from this datapoint puts us at a Hellball yield of ~2MT, which is certainly hellish enough!

However, to try to cross-check this answer, I took the 40′ damage radius provided by Hellball, mapped it to the “nothing survives” fireball radius of a nuclear warhead, and took the NUKEMAP for a spin. However, even with a surface blast from the tiny 20ton Davy Crockett, I get a fireball radius of 20m, or over 60′; getting a smaller fireball than that requires going to a 10-15ton yield, although model uncertainties become limiting at this small scale.

Of course, if you try to plug the Path 1 answer of 2MT into NUKEMAP, you get a far larger fireball of about a mile wide. Furthermore, 16d8 of raw energy damage sounds like a lot…but in the context of anywhere-close-to-upper-level D&D 3.5 characters, even with no saving throw, resists, or SR, the 128 maximum damage it produces is quite tankable. For example, the character that prompted this inquiry has 220HP with only their gear warding them, and still manages 112HP stark naked.

As a result, I am sitting here wondering if I’m barking up the wrong tree somewhere.

For a level 3 one shot I will be playing a Warlock who made a deal with the ghost of a wizard to help find a way to revive the wizard, and by carrying soot from the wizard’s final resting place in a locket, they stay near me and give me warlock powers. Because of this, I thought it’d be cool to have a ghost familiar through Pact of the Chain and since no ghost-like undead are CR 1, I decided to nerf a Will’O’wisp from CR 2 to 1.

For reference, here’s the original Will’O’Wisp and here are the Quasit and the Imp which are CR 1 creatures available through Pact of the Chain.

Is the following Will’O’Wisp homebrew comparable, or at least less powerful that other familiars at level 3? The two skills were added to flavour the creature as a wizard’s ghost and to give some utility outside of combat.

tiny celestial (since the Find Familiar spell only creates fiends, fey, and celestials, not undead)

Ephemeral. The will-o’-wisp can’t wear or carry anything.

Incorporeal Movement. The will-o’-wisp can move through other creatures and objects as if they were difficult terrain. It takes 5 (1d10) force damage if it ends its turn inside an object.

Variable Illumination. The will-o’-wisp sheds bright light in a 5- to 20-foot radius and dim light for an additional number of feet equal to the chosen radius. The will-o’-wisp can alter the radius as a bonus action.

Invisibility. The will-o’-wisp and its light magically become invisible until it attacks or uses its Consume Life, or until its concentration ends (as if concentrating on a spell).

I’m buying a new phone, upgrading from an LG Q7+, and so far the best phone I’ve seen is the Xiaomi Redmi Note 9. The only con to this is that the Note 9 is only available in International version, and I live in the USA. I’ve heard that Metro by T-Mobile (my service provider) is good for international phones, but I don’t know if it will be comparable to buying a domestic phone. That is, I don’t want to get a really good phone but sacrifice all of my connection speed. If it’s a little slower, I’m fine with it, but if it will be a major difference, I’ll shop domestic.

One thing I’ve noticed is that, according to this site https://www.gsmarena.com/compare.php3?idPhone1=9206&idPhone2=10192 , the Note 9 actually has more 4G connectivity than my current Q7+ (11 bands compared to 9). Does this mean that it will be more reliable than my current phone, or does this mean nothing since it’s international? (Note that I’m not very tech savvy. I know next to nothing about these complicated specs, so I don’t actually understand the numbers)

The bottom line is, I want to buy a new phone, but I want to be sure that the new model I’m considering will have comparable connectivity speed to a domestic phone. I know that T-Mobile will support international phones, but I want to be sure that the support is good compared to their domestic support. If anyone reading this owns a Xiaomi in the US, I’d love to hear from you, but anyone who knows about this sort of topic would be extremely useful to hear from. Thank you to anyone who has read this far. I appreciate the help!

EDIT: I’ve found this site https://www.kimovil.com/en/frequency-checker/US/xiaomi-redmi-note-9 which suggests that it will work on US networks, but I have no idea what the numbers and technical terms mean. I’d like to know what exactly this says about the network reliability in the US. Thanks for putting up with my lack of tech knowledge!

And my person class…

Is it possible to have on an Android device:

I have a DAG and I want to list all pairs of vertices that are not comparable (there is no route from the first to the second or from the second to the first).

In this image (taken from this StackOverflow question): 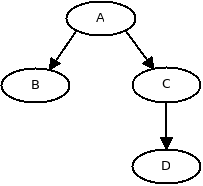 The result would be this:

I tried to maintain a list of predecessors on each node and review the graph layer by layer with a BFS, but the existence of borders within the layers (if I have layers by the shortest path) or of shortcut edges (as possibly of A to D in the previous example) prevented it from working.

The DXO score for the mobile camera (photo) Huawei Mate 30 Pro is 121 and for the medium format camera, Hasselblad X1D-50c is 102. Although the parameters are different for mobile phones and cameras, this implies that the mobile is "better" that the camera at least in some aspects?