I have Gmail’s multiple inbox set up, and can’t seem to combine OR, AND and NOT logic for the search term. My top group shows red-bang and drafts, my second group yellow-bang, my third red-star, and my fourth yellow-star.

which works fine, except that if i a draft message ALSO has a yellow bang, it shows in both groups

the logic i want, expressed in excel logic is:

I found an example here, which suggests it should be (term1 OR term2) but that didn’t work for me.

Any help or articles that properly explain it with examples of more complicated uses rather than just mentioning they exist, would be much appreciated!

Thanks in advance
Mike

which produces the plots: 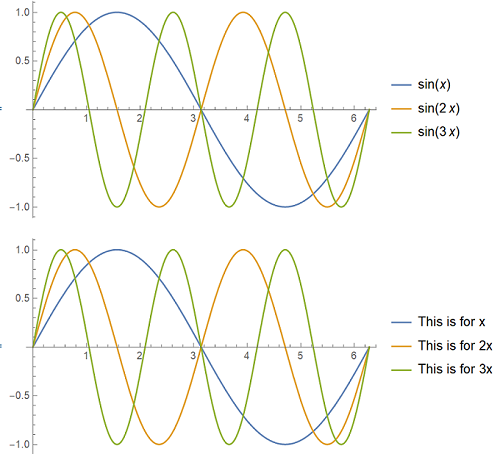 I need to write legends in such a way that it takes, say, 1st expression and then besides that it writes “This is for x” (same for 2nd and 3rd). How can we do this in Mathematica?

But, I am getting another set of legend down the figure: 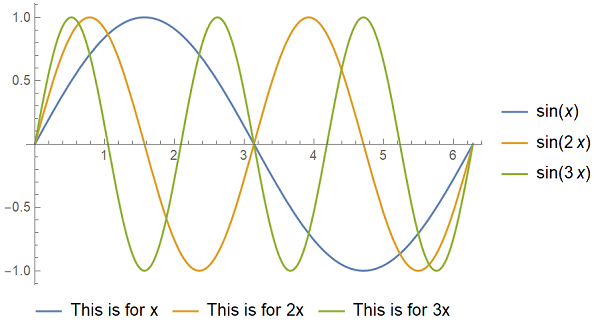 How can one accomplish this?

I have a chart where I am tracking reading progress through the Bible. I have the books in a table with the following data as columns:

I’d like for the color of each column to indicate whether that book has been read or not. Right now, when I add all the columns to a chart, I get the following results:

Any way I can do the following?

In MySQL, I am trying to insert all values from table A to table B, but I need to change the structure of table B and a column where all the values would be 0.

Is it possible to mix and create such a query as below, or what could be the possible query for this case?!
Many thanks.

I have a 2D Freeform Blend Tree that I’m using to animate a character that can currently:

My goal is to add in rotation, jump, crouch, and “firing when walking” animations.

In just dealing with turning or even jumping for now, I understand how to handle and call the animations in the code, but not sure of how it should be set up in the animator.

Do I transition to rotation/jump animations on the base layer? I’m reserved doing it this way because I lose the ability to blend and take advantage of those transitions.
Can I build it into my current 2D blend tree even though the blend tree is only X and Z axis? 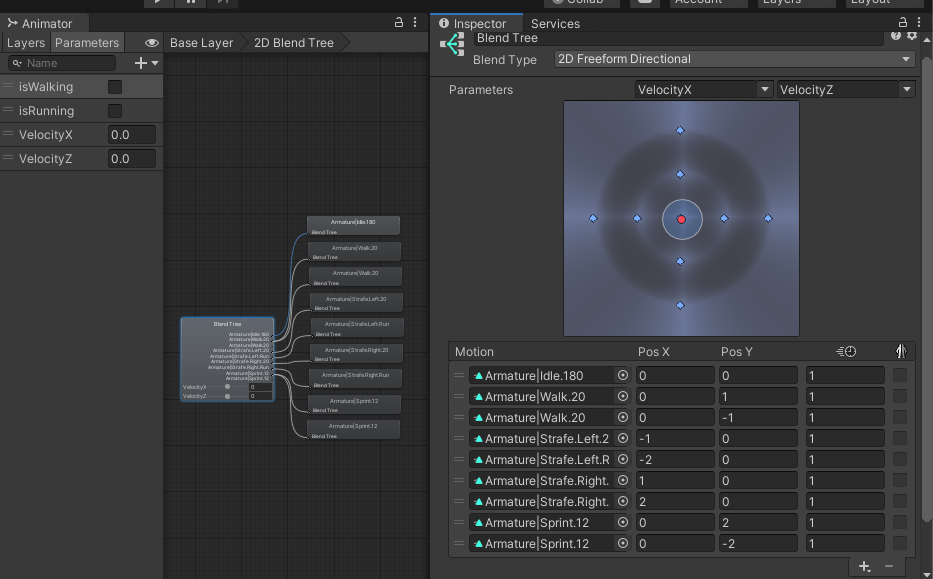 Also open to any feedback on improving the code above, my goal is as small and clean as possible! I do have a slight delay in animations starting when switching directions that I have to work out at some point and would eventually.

Looking for Core Scaffolding ( e.g. JSON, or API) designed to mix in fixed audio with individual fields in a SharePoint list.

In example the audio has a fixed message- such as “Current Pallets in Inventory” and then a designation for a specific SharePoint list field value.

Any samples/examples would be most appreciated.

I would put a search bar on the Home tab and optionally put a button on the Quick Action Toolbar. This button activates the search bar.

Thinking about how a search bar is used, it is not that obvious what it provides other than what a simple button for the Find command provides. To activate the search bar, a user has to click it or press the keyboard shortcut for it. Either way, a bar itself does not have to be always shown on the screen.

I think that the only thing that a search bar provides is the indication that users can search. This is useful for new users.

You state that your application is “fairly large,” from which I assume that users are expected to use it repeatedly and soon they get familiar with its basic functionality. In this case, we should not spend screen real estate for new users too much.

I am having difficulties creating this formula in google sheets. I have columns D,E,F with the headers:
Should Actual Diff.
Under D and E a drop down with Top Expert,Professional,Working Knowledge,Awareness of

I want the following conditions:

If “Top Expert” and “Professional” then “Slight Need”

If “Top Expert” and “Working Knowledge” then “Need”

If “Top Expert” and “Awareness of” then “Strong Need”

If “Professional” and “Top Expert” then “No Need”

If “Professional” and “Working Knowledge” then “Slight Need”

If “Professional” and “Awareness of” then “Need”

If “Working Knowledge” and “Top Expert” then “No Need”

If “Working Knowledge” and “Professional then “No Need”

If “Working Knowledge” and “Awareness of” then “Slight Need”

If “Awareness of” and “Top Expert” then “No Need”

If “Awareness of” and “Professional then “No Need”

If “Awareness of” and “Working Knowledge” then “No Need”

I’m trying to understand Quaternions in relation to rotation and orientation.

I’ve read that “multiple rotations are just multiplication”, but if that’s the case, why are the following are not equivalent?

(My reasoning is like looking at a unit vector starting in the x direction, which if I rotate 45 degrees in the y axis would give me a vector pointing in the z=x direction, but this is clearly naive as it doesn’t work)

An example plot of qx * qy (but using 5 degree rotations instead of 45) is: 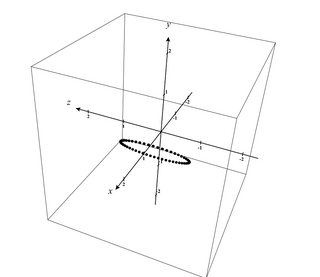 The q rotation I want gives me: 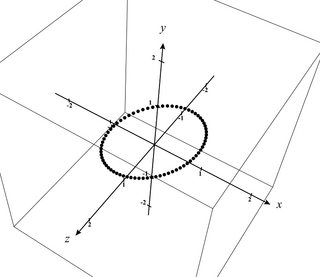 My understanding is qx and qy represent rotations about the given axis, or indeed also represent orientations, and if I use these independently and plot them, I get what I would expect, a point being rotated as required.

But if I start from either one of these, why doesn’t the multiplication of the other (which represents an initial orientation multiplied by a rotation) result in a rotation that would rotate a point by both the x and the y axis?

Which leads me to the question, what does qx * qy (or vica verca) represent here? (I think this is the key bit I’m not understanding.)

Is it possible to apply something to qx or qy to get the original q directly?

Problem:
Presently, the system only shows 1 name column which is the one imported by the HR. As such, we have instances where the HR wants to change the name but couldn’t because it has been updated by the employees on the mobile app.

On the backend however, there are 2 names data, HR imported name and employee updated name.

Proposed solution:
I proposed to concatenate the 2 name columns and create a new column ‘latest name’ so the HR will not need to refer to 2 columns for the ‘same’ information. This column will always show employee updated name when available, otherwise HR imported name. All employee updated name will be indicated with an asterisk and upon hover, a tooltip will appear to tell the HR that it has been updated by employee. 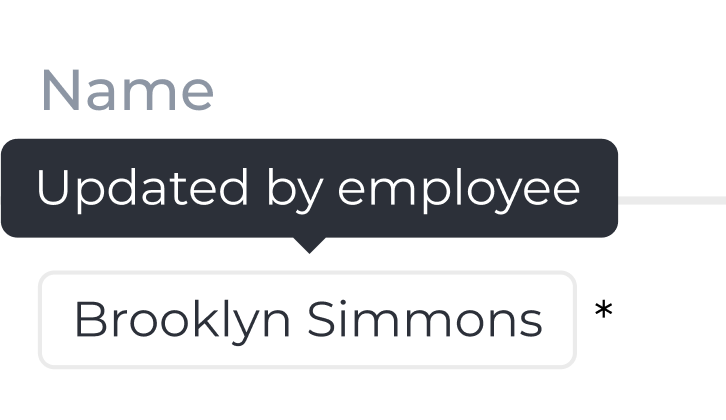 We will still keep the 2 original name data, but tucked in a filter column button where user can choose to show.

However, my engineer mentioned that many rows are already overloaded and prefers a more generic solution.

Does anyone here have any ideas how else I can do it?