Generally speaking most QR codes look as though they have about 50% of their cells black. If a putative QR code has 90% or only 10% of its cells black, we would reasonably conclude that it doesn’t look like a QR code. How much would the proportion of black cells normally have to differ from 50% before we can reach such a conclusion using a criterion of p < 0.05?

I use this feature all the time…

Having opened your sheet on Android, simply tap the cell you wish to access 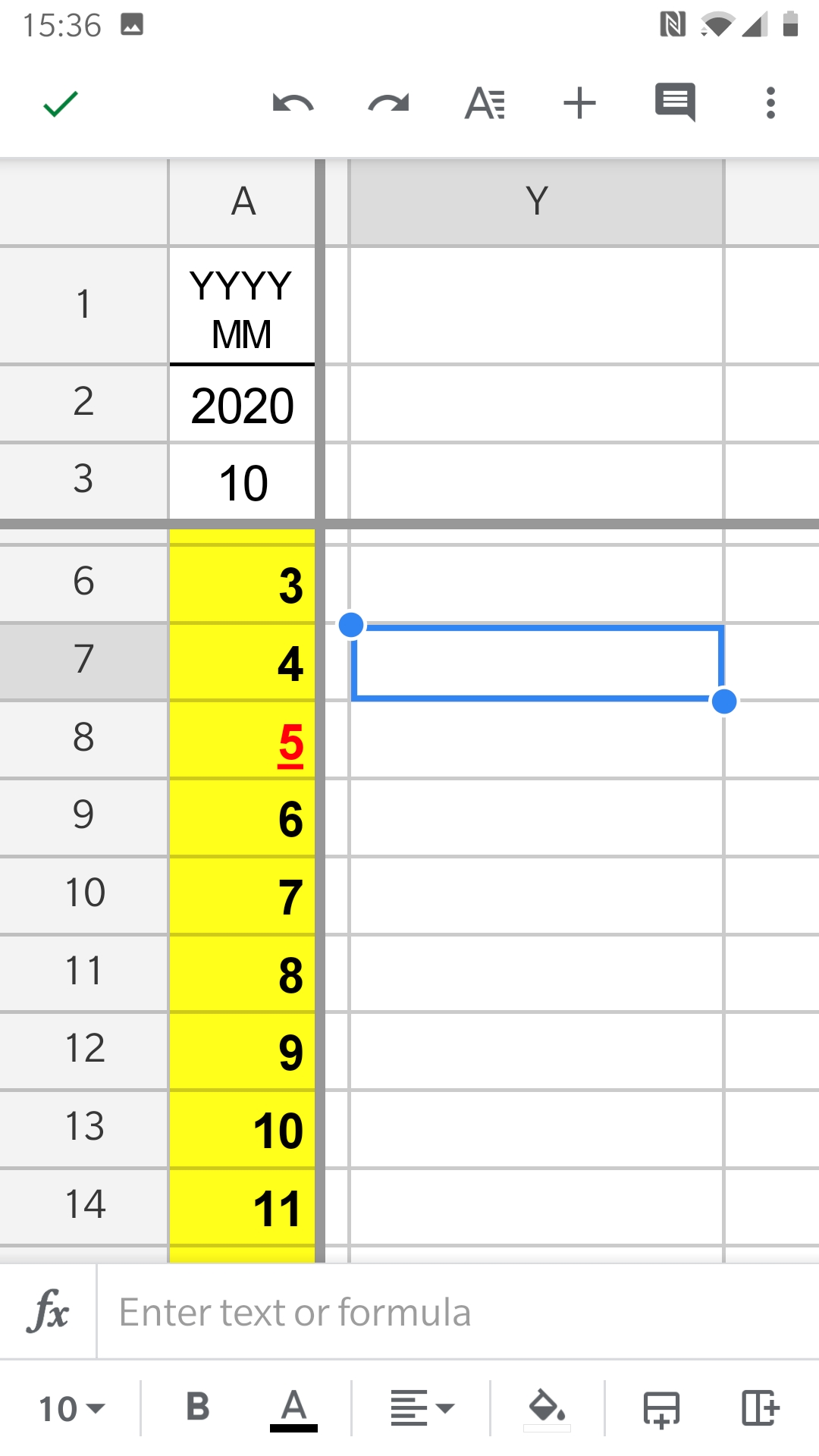 and at the bottom of the screen you will see the place where you can Enter text or formula. Once done, tap the tick ✓ (right of screen at the end of the entry panel)

and then tap the tick ✓ at the top left hand side of the screen and the job is done.

You can only enter data in one cell at at time but if you are wishing to select a number of cells (for example to edit colours, formatting cell ranges etc), use the corners of the cell selected and drag to open a range (but you cannot enter data that way nor can you, for that matter, in a browser. Neither can you you cannot select multiple unconnected cells.

On Windows it is possible by using the CTRL button + left mouse button and select multiple cells, but I did not find any solution on Google Sheets Android app.

How to select individual cells on Google Sheets on my Android mobile phone?

On Windows it is possible by using the CTRL button + left mouse button click, but I did not find any solution on Google Sheets for Android.

I want to preface this by saying this is NOT a duplicate of Sync two cells value. It’s similar, and uses the OnEdit() Function of Google Sheets, but the solution presented in that thread only works statically. This is an extension of that issue, not the same issue.

Let’s act like I work for Twitch for a second. My company uses a GSheet to keep track of all of our Monitored Streamers for the day, which includes regular streamers, partnered streams, and third-party pulls from other sources which require manual interaction. Each row includes the date, time, the name of the streamer, the stream ID, and the status – On Air, Delayed, Done.

Now, we keep the “Pulls” group on a separate subsheet, since those require actual effort on our part to go on air on time, as opposed to the normal streams which go off automatically. The “Pulls” subsheet is similar to the Monitored Streamers subsheet in that it has the date, time, name, and status of each Pull stream, but it also includes the encoder information on the same row, hence the need for a separate sheet.

Now, I read through Sync two cells value, but as I stated before, the answer for that thread only works on static cell placement and hardcoded sheets. Our rows move constantly, since we’re always adding and removing streams from the sheet, so this solution won’t work.

Actually, now that I’m reading the linked topic again, I’m realizing that what I’m really asking for is a version of that script that has abstractions of the cell ranges as opposed to hardcoding the whole thing, preferably through function parameters so we can link multiple different cells across both sheets. (Sometimes we have to change the stream ID or date and whatnot, and it would be awesome if all of those synchronized across both sheets.)

This question was migrated from Super User because it can be answered on Web Applications Stack Exchange.
Migrated 1 hour ago.


Alright, so I’ve been having this issue for a few hours now and am confident to say that I can’t fix it by myself.

I’ve been playing around with Google Sheets trying to apply Conditional Formatting when another referenced cell is not empty.

Here’s an image of the issue, it will definitely help you understand what I’m trying to do.

However, here’s what happens when I do the following two things (using an IF function to determine the state and then parse the true or false state towards the Conditional Formatting rule), here’s where the broken magic comes into play.

I am lost to why this happens as from what you can see in the screenshots, B2 is never empty.

EDIT: For whatever reason, when I set it to =IF(ISBLANK(B2), true, true), it works as expected, as seen here. I would still like to hear an explanation if anybody has one.

I am working on a DockedCells toolbar for common tasks like Save, ClearAll, scrolling, etc., etc. My next addition to that toolbar is creating a button that executes Evaluation -> Evaluate Notebook. I only need the function to work. I already know how to insert that into a button.

When I type NotebookEvaluate(EvaluationNotebook(), InsertResults -> True)directly into a cell and doing a Shift-Enter nothing visual happens other than showing (Running...) for an extended period of time at the top window frame of the notebook. I am not sure what is supposed to happen here so I did an Abort Evaluation as too much time has passed. It should only take 1 second for this particular notebook.

Why isn’t this behaving like doing Evaluation -> Evaluate Notebook from the menu?

You have a Google Form which exports results to a Google Sheet; you have embeded the sheet in a Google Doc and you are looking for a way to update the Google Doc automatically whenever there is a new form response.

Your scenario differs in two ways:

1 – you want to update the Google document for every new form response, and
2 – you want the update to be automatic.

You have a Google Form, Google Spreadsheet and a Google Document.

I have a sheet where column A shows one month per row and column B is supposed to calculate an amount in USD for that month.

What I am trying to achieve is that the USD values in column B are automatically calculated by looking at start and end dates specified in two other columns and then taking a corresponding value from a column next to the date range if the month in column A falls in between that range.

This is tricky to explain so I have created a demo which you can look at here: https://docs.google.com/spreadsheets/d/1vJkkEkNdLBIH6ifx_B7FJLiL9azJHyIuSRy90IRfPp4/edit?usp=sharing

I have found a few suggestions for similar problems online but wasn’t able to get any of them to work for my specific case. Any help is very welcome

let’s say I want to categorize my credit card expenses

so I’ll put a possible categories list in the setup tab as following: 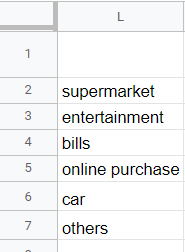 now in the other tab: credit card expenses, I’ll set data validation rule as such: 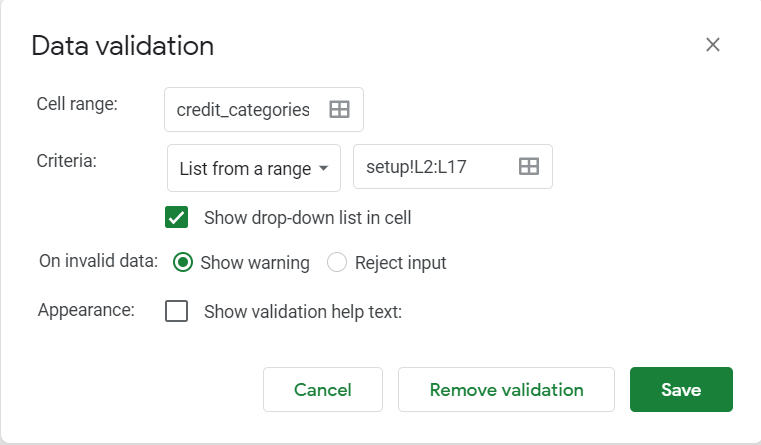 (*) I usually select longer list than the existing one so I can easily add more later and it will already be defined in the list (for this example I can add more in cells L8:L17)

Now, to make things more readable I like to add colors,
So I want that the following color theme will be applied in my credit card expenses: 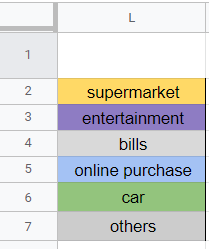 Now, as far as I know, if I want to set such color theme, for N categories,

Now, as you can now see, if N is very big, this process gets annoying,
especially if I have multiple tabs such as credit card expenses and I need to set those rules to each of them..
Also if I want to change those colors later, I’ll need to update those rules everywhere I did so.

Also, cutting and pasting cells kinda ruins conditional formatting rules so I don’t quite like them..

so my question is:

Can I simply color up the cells in my setup tab and somehow set the
data validation rule to copy the color with it from the range list?