Let’s say humans have finally made a successful colony on Mars, how useful would bitcoin be to transfer value between Earth and Mars?

If you’re talking about the Bitcoin blockchain in its current form, it will restrict mining to one of both planets.

Bitcoin’s assumptions include a block propagation time between miners is negligible compared to the interblock time (10 minutes). We’ve already seen the effects of a few seconds block propagation time on Earth: miners being forced to build upon each other’s work without validating, to avoid orphaning during that time. This incentive encourages centralization, hurts Bitcoin’s security (especially for light clients), and makes mining (even) less permissionless to enter.

The distance between Earth and Mars can be up to 401 million km, when they’re on opposite sides of the Sun. Following the laws of relativity, it is fundamentally impossible to communicate between them in less than 22 minutes in that case. A propagation time of 22 minutes would utterly destroy any ability to mine on both sides. As there is a delay of 22 minutes before Earth can mine on top of a block created by Mars, or the other way around, but not when a planet mines on top of a block created by itself, you would end up with an almost persistently forked chain between the two. The slower planer would eventually always switch over to that of the faster planet, making the faster planet win far more blocks than proportional to its hashrate. Effectively, the delay between the two planets turns mining into a race rather than a lottery.

And if it won’t work with the current implementation, what would need to be changed in order for btc to be used interplanetary?

The above issue could probably be solved by using a chain with a ~1 week interblock time rather than 10 minutes, to compensate for the larger propagation time.

If we’re fine with mining being controlled by one of both planets (effectively giving that planet the arbitrarily censor the other planet’s transactions), it would probably work fine.

There are other issues though; another problem is partitioning. Bitcoin strongly relies on peers in the network to be able to communicate without ending up on their own islands of connectivity. There would need to be multiple independent communication links between the two planets to avoid a partition between Earth and Mars. If mining is knowingly on one side, the worst effect of a connectivity failure is just the lack of ability to see confirmations on the other side, though it may take hours (=a few roundtrips) to notice this.

Many of us knows that chain networks are also susceptible to hacking though sure hackers will have a hard time hacking into the network, but what if hackers could create a virus to slowly damage the network without us even realizing it, Is it even possible?

Let’s say that i received an amount of BTC to my Binance wallet like one week ago.

How can i know the value of it By USDT at time of arrival.

Usually, i was check that from blockchain.com directly where i hover by mouse and see the equivalent value by USDT at time of receive.

There was a feature of the market known as the ‘Kimchi Premium’, where it looked like this should have been possible with South Korean markets. However the capital controls and other regulations made this difficult or impossible to exploit. It is possible you are missing some forex complexity.

Let’s say that i received an amount of BTC to my Binance wallet like one week ago.

How can i know the value of it By USDT at time of arrival.

Usually, i was check that from blockchain.com directly where i hover by mouse and see the equivalent value by USDT at time of receive.

I want to create a cryptocurrency wallet in the blockchain system. also I don’t want to use other wallet APIs.
for this purpose which knowledge do I need to know? which programming languages do we need?
I know how to program with node js.

If a node observes a fork in the bitcoin chain, then the node will choose the chain that has the highest difficulty (sum of difficulty in each block of the chain).

But the difficulty changes only once every 2016 blocks. So, if a fork occurs somewhere in between, then the difficulty is the same for both the side chains right? How does the node pick the main chain then? Just randomly?

My goal is to add a new feature to Bitcoin, which requires changing the structure of the Bitcoin blockchain. So I was wondering if Bitcoin Core supports having a new/own Blockchain? If so, how to do it? Right now, I manage to run bitcoind but it seems to sync from the existing Bitcoin blockchain.

Questions about cryptocurrencies or projects that are not Bitcoin, and are not applicable to Bitcoin, are off-topic. For more information, see this meta discussion.


Want to improve this question? Update the question so it’s on-topic for Bitcoin Stack Exchange.

I have one idea about creating another Money like bitcoin which be more effective.

That is about creating :
One Electronic money with half or more calculation used for creating CPU needs for intelligence artificial project.

There are some method for creating personal crypto like bitcoin which described via internet (search link); 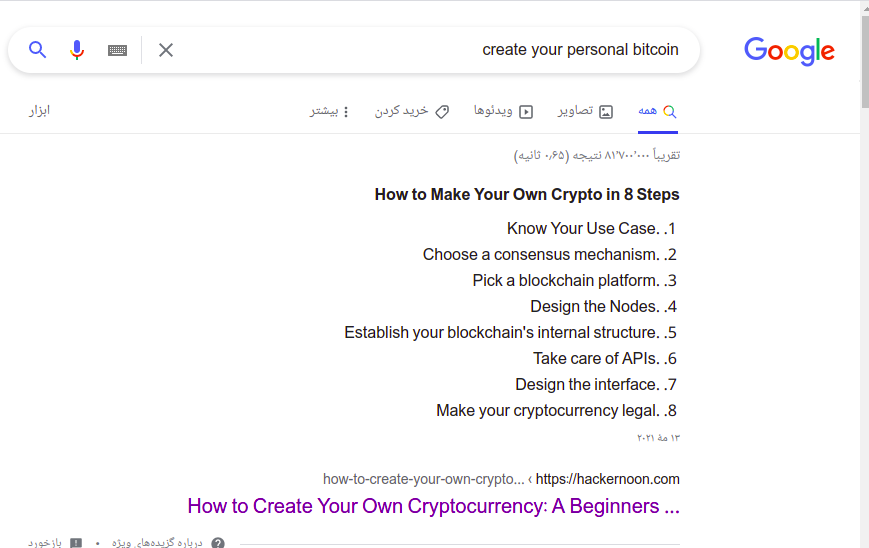 In This purpose, Their algorithm must be changed for reducing their CPU Usage and Getting some Permission from The Users (android app users or …) to have their CPU for AI Calculations.

Also, There are some project for making Big Supercomputers with the small CPUs (home PCs or …) which has been described here:

So if possible, I have asked here for having some comment for building the personal Crypto Android application and the part of folding the separate CPUs to make a supercomputer.