DAG specifies the relationship of one node must appear after another. What if I add an additional constraint where one node cannot appear before another on top of the DAG?

Is there an algorithm for generating topological sequence from DAG with such constraint? Or maybe I can transform the DAG with this constraint?

Every time I try to delete them and close the app, they automatically come back in “recently deleted”.

I tracked it down to Drupal/Core/Extension/ModuleInstaller.php where a call is made to $extension_config = Drupal::configFactory()->getEditable(‘core.extension’); and my old module is returned in the list of modules.

What can I do to erase any remnants of the old one from my database?

Actually, the answer above is incorrect. You would need to read the question carefully. In this case, the title tag is too long and Google decided to use what it determines as a brand which is simply the domain name without the TLD.

I detailed the process in this answer:

But I will paraphrase it for you.

For a few years now, Google has been experimenting with the SERPs most notably since March 2014. As a part of this, the title tag under certain circumstances may be changed. One factor is the title length. As of this writing, if the title tag length is greater than 512 pixels in length Google may chose to use:

In the case of the OP’s scenario, Google has chosen to use the domain name (IGN) as a brand name and return it as the SERP link. Managing the title tag length will solve this issue.

Also, this answer may help too: Title in Google does not match <title> of document

This is a cross-post from Math.SE, where no answer was given after 3 months.

Consider a plane 2D wavelet moving towards a corner reflector with 120° opening angle with infinitely extended sides. The surface of the reflector has homogeneous Dirichlet boundary conditions imposed, and the wave obeys the usual hyperbolic wave equation:

The solution, with the initially propagating part and the reflections, can be easily constructed by rotating the initial wavelet, changing its sign and putting the resulting wavelet next to the initial one so as to satisfy the boundary conditions by canceling the wave function at the boundaries. The result will look like this (ignore the small-wavelength artifacts, they are due to numeric errors in the simulation):

But as the points of the slanted reflected waves come close to the corner, there appears a problem: simply “sliding” the reflected part no longer works, since the shape of the reflecting boundary abruptly changes. Moreover, numerical simulation (see below) shows that the reflection from the corner doesn’t produce a backwards-propagating plane wave (that we’d get from a 90° corner): instead the original slanted reflections continue their paths, and a new, cylindrical, wave originates from the corner. This cylindrical wave appears to cancel out the values of the slanted reflections on the boundary to satisfy the boundary conditions.

My question is: what is the analytical form of this cylindrical wave? It doesn’t seem to be a Bessel function, because Bessel functions don’t have constant amplitude nor constant wavelength (they change with radius). So what is it then? Does it have a closed form? Or is it at least explicitly expressible as an integral or a series?

Device is an Alpha Aetheros AR9271, OS is actually the Ubuntu variant Bodhi.

The external wifi adapter is connected and is listed as detected. However networks do not appear and I get a “device not managed” error.

I changed FALSE to TRUE in etc/NetworkManager/NetworkManager.conf, it fixed “device not managed” for the ethernet, but not for the wireless.

I’m attempting to create a dashboard page that contains 4 tabs that are each a block that will contain a content based on the current user. I went ahead and created the 4 blocks (bl1, bl2, bl3, and bl4), added the blocks to content under block layout and then created the Quicktabs Instance to display these 4 blocks. So far so good.

However, when I go to customize the tab blocks in my theme, that theme is not getting picked up through quicktabs… My dashboard template looks like so:

The content from these template files are not being pulled into the quicktabs. If I load the block manually in dashboard like so: {{ drupal_entity('block', 'bl1') }} the expected block styling is there..

How do you get quicktabs to show your custom block templates?

Perhaps I’m taking the wrong approach and shouldn’t use quicktabs and instead just write my own tab bar in twig and display the different blocks directly in the dashboard template?

The drive (Seagate IronWolf ST4000VN008 – 4 TB) got 2 partitions before and both partitions cannot be opened.

I managed to recover the second partition by running chkdsk F: /f /x /r Although its weird since the partition is now reported as FAT32 when I believe it is NTFS before but I can open the files on that partition without issues.

I tried chkdsk the first partition but I am getting

I am trying testdisk now but one issue is its incorrect size. Will it damage the drive if the drive is reporting a different size. I tried modifying the CHS to correct the size reported by testdisk. I found 16383 16 63 as the values posted on one of the spec sheet of the drive( https://www.bhphotovideo.com/lit_files/361144.pdf ) but it is not correct when entered on testdisk.

Any other software I can use to recover my partition?

So I installed Ubuntu and thought I’d try out this video. When I was following along I noticed that not all programs are listed in the Ubuntu Software Appliction. Does anyone have ideas on what it could be? I tried installing Synaptic Package Installer and Dconf Editor. Did they get removed because the video is only one month old?

I’m running into an issue on a site that has been customized by another developer since it was originally built. The domain is appearing:

I turned on Troubleshooting mode so it’s using the TwentyNineteen theme and no plugins, but this does not work either, so maybe it’s something in WP core or otherwise?

I’ve looked through about a hundred PHP files for echo, print, get_bloginfo(), etc but I can’t find this anywhere. I also tried looking for inserts, prepends, etc in JS because of the weird situation with ACF field insertion after toggling. 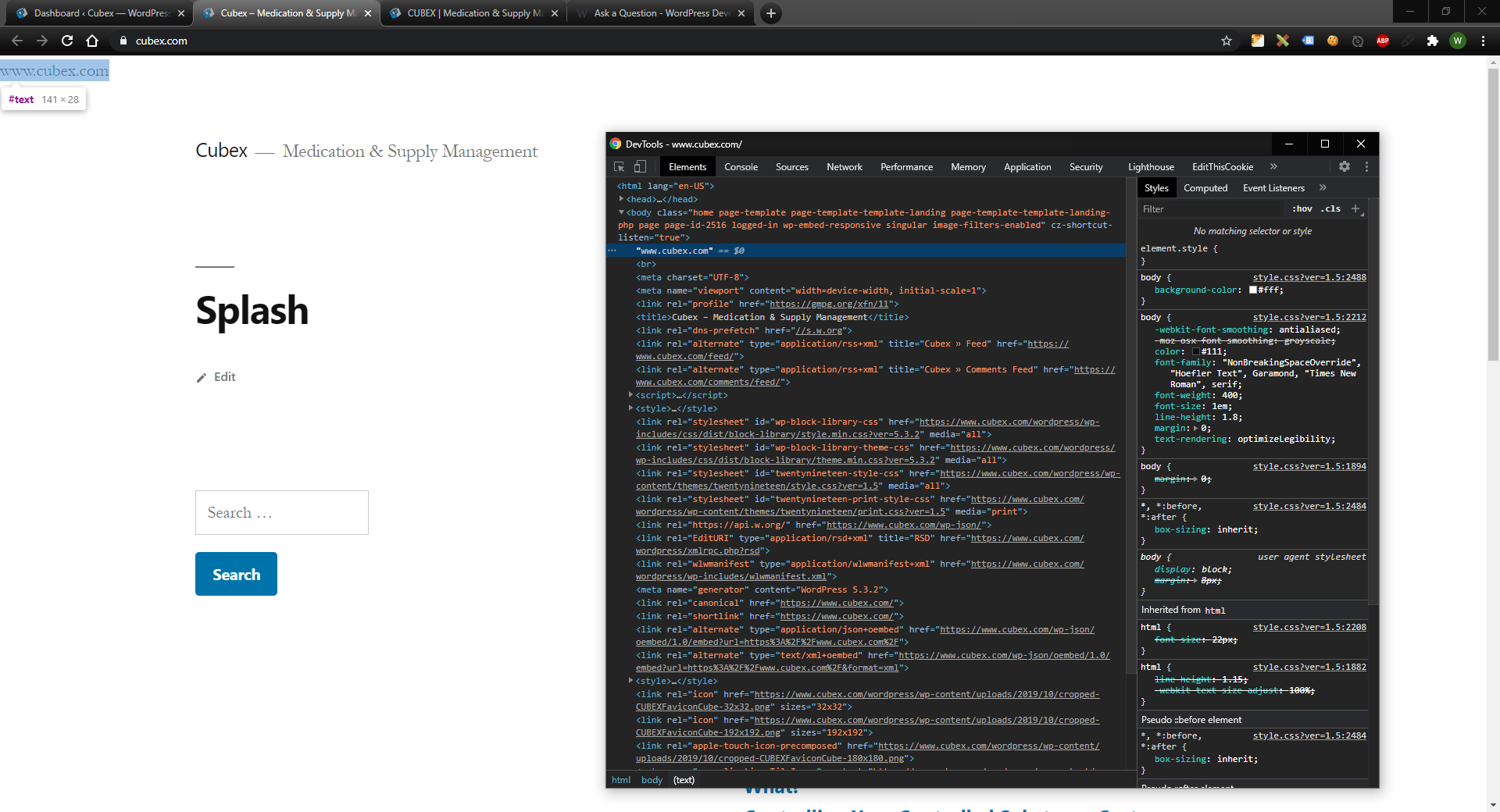