Maybe some of you have had the same experience as me, scrolling through a youtube section and seeing two accounts with names that seem real promoting what seems to be an illegal ‘hacking’ website (like instapwn).

Is just reporting these accounts for ‘Unwanted commercial content or spam’ the best we can do, or is there a more appropriate action? And even more importantly does youtube even care?

Hi all, I currently have a restriction on my advertising on Facebook. I will take you through what has happened. Any help with sorting this out or suggestions on what to try most welcome.

I am in the process of promoting a new card game I plan to crowdfund later this year via Kickstarter. It called UFO Wave and is themed on the subject of UFOs (Note: Not trying to advertise it here in any way, I’m just giving a complete explanation). I am already a UFO Investigator for many years and have built up quite a following so have over 1000 friends on FB. Most of these individuals have followed me because of my backgrond, so I knew they’d very likely be into the game. I set up a new page for the game (through my personal account, not a new business account for my sole trading company).

It instructed me that I could invite friends to join the page so I decided to start going through my friends list and adding them in fast succession. There was no warning at all that this would have any adverse effect and I thought I was doing nothing wrong. The Facebook bot detected this and flagged this as suspicious activity. I was blocked from adding more people to the page. Even though this was the case I started to have a look into how to boost a post to promote the game (Completely from within FB not from Business Manager). It had red text on it indicating it was restricted. I immediately realised this was likely blocked for the same reason.

I looked online and videos advised this would go back to normal after a number of days. Sure enough a few days later I found I could once again add people to the page. I tried running an advert as a test to see what would happen, spending £20 to reach a number of people. After a while I noticed it was not active and no money had been taken. In checking my account it looked mentioned that my advertising was still restricted.

I looked around everywhere for a support live chat which I heard used to exist in the past but now does not. So instead there was the option to appeal the restricition decision. Great! However on one of the screens where it was asking me to click a button to confirm my identity the button was greyed out. I was essentially stuck.

So I raised a support ticket. A day later I got a response from a lady named Marie. It informed me to do exactly what I had already tried – raise an appeal. So I responded saying this was not an option and attached a screen shot showing the disabled button. Another day goes by and I get another response. At first I’m excited thinking they’ve come back to me to provide details on what to do next. But to my dismay I see exactly the same message back from them with the word Marie replaced with Sophie. So the support help is a robot with a default response not a human being.

So I was stuck. I tried various things all to no avail, I could find out no way of reaching them directly to explain the situation. I raised an official complaint and got no response from that. After a while the 30 days ran out and I got a message saying my account was fully disabled from running adverts. I can post in the page, I can invite people to the page but when I try to create an advert within it, it just drops back to the page with no messages or anything appearing.

I don’t really know what to do next, but I’ve thought of a few potential options…

I could set up a brand new Facebook account for the business, but if it sees its linked with me in any way (e.g. my name, adderess or bank details) then that might get restricted too.

I could potentially hire another business to advertise for me but this would no doubt be expensive and I’d probably make a loss, making the whole thing pointless.

I could get a friend to set up a brand new business with no links to me at all other than the page the external website they direct people to with the advert. Is this potentially a solution? However I’m frightened after what’s happened that if they do this they may get restricted or blocked in some way.

At this stage anything I do could flag as suspicious and for all I know my entire account may be shut down, all thanks to an inncocent mistake which was not intended to be malicious or spammy in any way. I’m completely confused and feel like Facebook has backed me into a corner. It’s the most ridiculous situation ever, I’ve never seen a company so adamant to stop me from willingly giving them my money.

Can anyone please assist or tell me what I need to do next? If anyone knows a legitimate way of speaking with Facebook to get my account re-activated, or knows that I’ve done something wrong here and I need to do things differently (And that doing so will not lead to any adverse effects) please let me know.

Author: @Joshua Farrell
Welcome to Bizdustry! Thank you for joining us, and even a bigger thank you for your interest to want to continue to make this forum a great place to be! Want to advertise here at Bizdustry? The following are our advertising locations, and their prices. Once you have figured which ad location below you want to advertise in, and the ad size, feel free to send a message to @Alexander, or send an email to (email protected) . From there, we will set up the ads to run on the appropriate device type, based on the ad size.

Global Header, Below Header Navigation Bar and Help Box – Random Display
This location is Below the Forum Header, above the forum body. (screenshot of location)
Sizes Available: 728×90 (Desktop), 468×60 (Desktop or Tablet), 320×50 (Tablet or Mobile Device)
Pricing: $30 USD Per Month

Global Footer – Bottom of Forum Body, Random Display
This location is Below the Forum Body above the forum credits, and below the bottom forum navigation. (screenshot of location)
Sizes Available: 728×90 (Desktop), 468×60 (Desktop or Tablet), 320×50 (Tablet or Mobile Device)
Pricing: $25 USD Per Month

Administration Signatures – Random Display
This location is located inside of each of the individual Administrator’s Signatures.
Sizes Available: 728×90 (Desktop), 468×60 (Desktop or Tablet), 320×50 (Tablet or Mobile Device)
Pricing: $30 USD Per Month

Anyone tried advertising via Twitter? Are you kind enough to share some insights? Price, conversion, reach, achievements, profit etc.

https://about.ads.microsoft.com/en-us/resources/training/universal-event-tracking says “To get started, click the Campaigns page, and then on the left pane, click Conversion Tracking“: 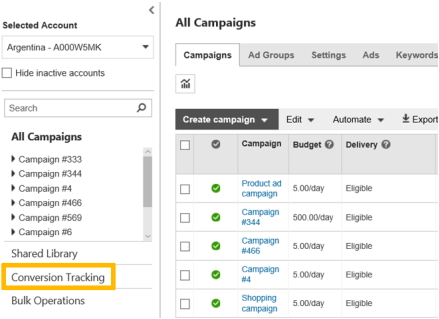 Only problem: I’m not seeing a “Conversion Tracking” link when I click on “Campaigns”:


Guest, we are pleased to inform you that Forum Promotion has been integrated with Discord. This means no matter where you are. You will always stay connected to Forum Promotion. You can connect your Discord account by going to your account settings > connected-accounts or by Clicking here.
Once your account is connected, you will automatically join our server (if you have already joined, you will be automatically roled). You will automatically be given the role of “Approved Users.” And whenever a thread/post is created, a message will be posted in #new-threads and #new-posts.

Advertise virtually anything here, with CPM banner ads, CPM email ads and CPC contextual links. You can target relevant areas of the site and show ads based on geographical location of the user if you wish.

TL;DR – Would photographs that I’ve captured and displayed on my personal photography website be considered commercial if I’m not selling them? I would purely be selling my general photography services, or other photos that I know I can sell without any concerns for permission.

I’m currently building a photography site showing photos I’ve taken. I would not be selling them for purchase – they’re purely to demonstrate the composition style I like and the types of photographs I’ve previously captured. But I want the site to be used as a way for people to pay for my services (e.g they wanted to use me in the future for their own personal shoots…)

If I had a photo I’d previously taken (e.g such as in a museum, and the museum requires permission for commercial still shots), would placing that photo on my site be classed as commercial, even if I’m not selling it?

Anyone know what the specificity hierarchy is on Google Ads? Does it always attribute the results to the most specific target?

For example if you have a radius inside a radius will it attribute the ad results to the smaller radius? Same for keywords that are exact match vs phrase match?

I Will Send UNLIMITED and Real Targeted Website TRAFFIC To Your Offer.

How can it work? It is quite simple!

3. Your links appear on publisher websites and you also get Tons of traffic that is exceptionally engaged!

When placing an order please send me your real website URL. Do not send shortener URL.